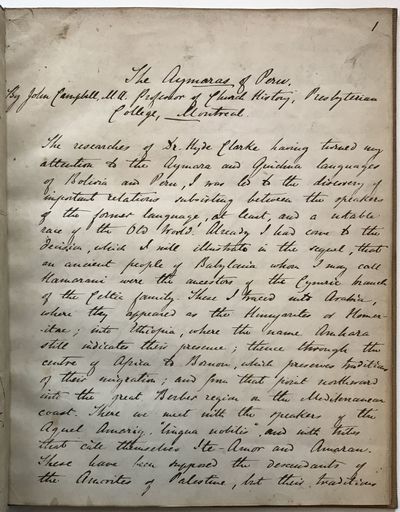 by Campbell, John. [Indian Language]
[Montreal, 1870. About very good.. [17]pp. Quarto. Original plain wrappers, bound into contemporary buckram, gilt spine label. Light foxing and wear to buckram. Front hinge cracking, front endpaper detaching. Two chips at fore-edges of final two leaves, not affecting text, otherwise internally clean. Accomplished in a neat, legible hand. A fascinating, if somewhat eccentric, manuscript essay on South American linguistic history and its supposed connections to Gaelic languages by a Scottish-Canadian professor at the Presbyterian College of Montreal. John Campbell was principally a professor of church history, but was also a serious student of anthropology, philology, and linguistics, and published numerous articles and monographs on a wide variety of subjects. Campbell was born in Edinburgh, and immigrated to Montreal via London and Toronto in the 1870s, where he was appointed to a professorship in 1873. His wide-ranging publications include scholarly and polemical essays in various academic journals, a volume of children's story sermons, and a novel set in the Muskoka region of Ontario. His most well-known work was a two volume ethnographic study entitled "The Hittites," in which he claimed that the people were descendants of the Japanese, Basques, and Peruvians, among others. "Later critics, with reason, considered him an academic dilettante" - Canadian Dictionary of Biography. The present work continues such grandiose thinking, and claims a linguistic and genealogical link between the Aymara peoples of Peru and Bolivia and the Celts. Through the comparison of selected words in Aymara, Quechua, Gaelic, and Welsh, complete with several tables and appendices, Campbell argues that, "The large number of words identical in form and meaning in the two languages suffice to establish the common origin of Celts and Aymaras." The essay continues to make additional comparisons with Quechua, and cites the research of Hyde Clark as the inspiration for its line of inquiry. Campbell likely prepared this essay as one of his many contributions to Canadian academic journals. In an article he published in the journal of the Royal Society of Canada at the turn of the 20th century, he states that, 'Some years previous, I pointed out a large Celtic element in the dialects of Peru, and notably in that of the Aymaras." Hyde Clark references Campbell's theories in this area in his own book, "The Khita and Khita-Peruvian Epoch," published in 1877. Nevertheless, we are unable to locate a published version of this essay. A strange, yet enthusiastic work, asserting a tenuous theory of native Peruvian language. (Inventory #: 530)
$1,250.00 add to cart or Buy Direct from
McBride Rare Books
Share this item