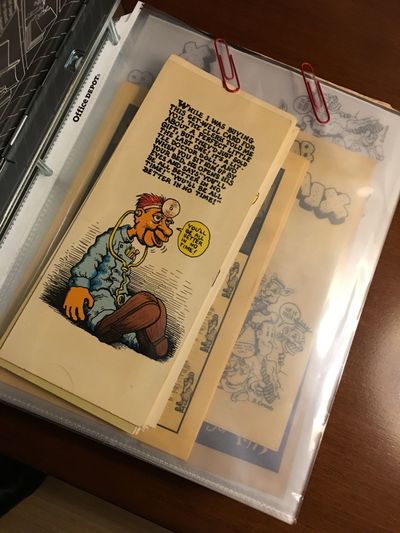 signed first edition
by Crumb, Robert & Michael "Aitch" Price
All items in very good to near fine condition. R. Crumb. Robert Crumb and Mike Price joined forces during the 1980s to produce a stage play, R. CRUMB COMIX: THE PLAY, with stage director Johnny Simons at Texas' Hip Pocket Theatre in Fort Worth. This archive contains related original correspondence from R Crumb to Mike Price in the form of 20 ALS's, 8 Postcards written and signed by R; Crumb, some 11,000 words, plus related production materials and ephemera, all housed in glassine sleeves in a 4-inch pin binder. The archive was assembled by Mike Price, a long time Fort Worth journalist, author, movie historian, comic book writer, and musician. Price was the musical director for the play COMIX under the auspices of his Cremo Studios. Most of the correspondence, in R. Crumb's unmistakable hand, is postmarked from his Winters, CA address (a few from France) along with related production materials including; the original soundtrack for the play, on two CD's, 9 Crumb unused postcards (circa 1980), 6 color slides from the play (some of R. Crumb), a prop from the play (a full-page negative of 'Uncle Bob'), a color photograph of Robert and Mike Price making music at the theatre, newspaper articles relating to the play, to 'Keep on Truckin', articles about Crumb's career, etc. Mike Price's musical knowledge and musicianship, his understanding of the whole cartoon landscape and history, old-time blues music, old time cartoons and what came before, his musical roots, all of these traits drew in Robert and made him part of THE PLAY. Most importantly it was the respect Crumb and Price had for each other that help illustrate the enthusiasm each had for creating their own brand of art. Also included in the correspondence are topics like: the documentary by Terry Zwigoff, and a screenplay written by both Crumb and Zwigoff while awaiting financing for the documentary, called "SALLY" patterned after BIG FOOT which Robert has a long time obssession with (focusing on his AMAZON woman character), also photographs advertising the documentary, some of Crumb's 'Blues Cards", and many other gems. An amazing archive that provide a wealth of insights into Crumb's creative process. (Inventory #: 14104)
$17500.00 add to cart or Buy Direct from Ed Smith Books
Share this item