A VOYAGE ROUND GREAT BRITAIN, UNDERTAKEN IN THE SUMMER OF THE YEAR 1813, AND COMMENCING FROM THE LAND'S-END, CORNWALL ... WITH A SERIES OF VIEWS, ILLUSTRATIVE OF THE CHARACTER AND PROMINENT FEATURES OF THE COAST 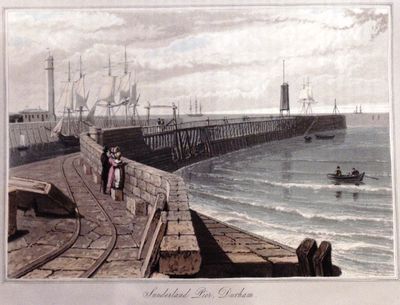 by AYTON, Richard
London: Longman, Hurst, Rees, Orme, and Brown, 1814-1825. First Edition. Hardcover. Contents with occasional light foxing (primarily to text leaves facing plates but slightly affecting a few plates) and some offsetting from plates, else clean. All bindings quite solid and attractive, some light rubbing or scuffing to some hinges and edges or corners, one volume with small tear at base of spine, a few small scuffs and similar minor blemishes. A clean and handsome set in nicely preserved bindings, Near Fine. William Daniell. Complete in 8 folio (10-1/4" x 14-1/4") volumes handsomely bound in 6 volumes in later 19th century deep-green morocco leather with gilt rules, heavily gilt-decorated spines with contrasting gilt-lettered morocco spine labels, gilt dentelles, marbled endpapers, all edges gilt. Illustrated with 308 lovely hand-colored aquatint plates by and after William Daniell on heavy stock and an uncolored aquatint dedication plate in the first volume; without the additional uncolored stipple-engraving of "Kemaes Head, Pembrokshire" and map found in some copies. From the introduction: "While the inland counties of England had been so hackneyed by travellers ... the coast has hitherto been most unaccountably neglected, and, if we except a few fashionable watering-places, is entirely unknown to the public ... It is the design, therefore, of the following voyage, minutely to describe the whole coast round Great Britain." A monumental work with stunning views unsurpassed both in delicacy of drawing and tinting.

Abbey, SCENERY 16; Prideaux page 326: "Such a succession of beautiful plates is scarcely to be found elsewhere and they are unsurpassed both in delicacy of drawing and tinting"; Tooley 177: "FIRST EDITION OF THE MOST IMPORTANT COLOUR PLATE BOOK ON BRITISH TOPOGRAPHY." (Inventory #: 019235)
$20000.00 add to cart or Buy Direct from Charles Agvent
Share this item