THE WELL OF LONELINESS 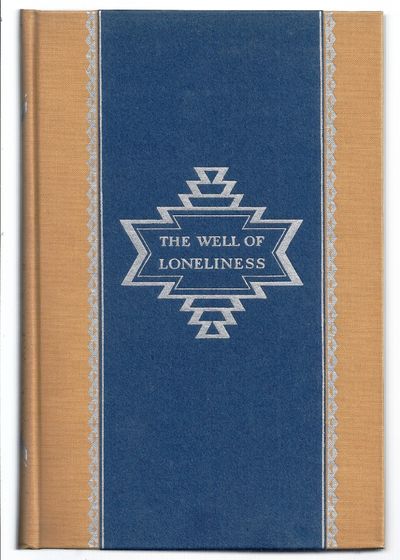 by HALL, Radclyffe
New York: Covici-Friede, 1929. First Limited Edition. hardcover. Virtually no rubbing of the silver on the spine, somewhat unusual for this title, but some small, light spotting to the spine of one volume. About Fine in a Near Fine slipcase with a partial split at the top edge, uncommon in this condition. The Victory Edition consisting of two large octavo volumes (6-1/4" x 9-3/4") bound in silver-stamped yellow cloth and blue boards printed on Van Gelder handmade paper. Copy #34 of only 225 copies SIGNED by the author. A pioneering book dealing with lesbianism.

THE WELL OF LONELINESS provided an open treatment of lesbianism at a time when homosexuality could not be discussed in English books or in the English press. In 1920, the House of Lords declined to amend the criminal laws of England to include lesbians because the Lords would not acknowledge that they even existed. Following its 1928 publication in England, the book was ordered withdrawn from sale by the Secretary of the Home Office. Early in 1929 in New York, Charles Sumner, Secretary of the New York Society for the Suppression of Vice, acting under a warrant, raided the office of the publisher and removed 865 copies remaining from the sixth edition, then raided Macy's(!) book department. This edition contains a summary of the court proceedings by defense attorney Morris Ernst and a one-paragraph Commentary by Havelock Ellis, author of the (also) suppressed 1897 STUDIES IN THE PSYCHOLOGY OF SEX, who notes that "apart from its fine qualities as a novel by a writer of accomplished art . . . it is the first English novel which presents, in completely faithful and uncompromising form, one particular aspect of sexual life as it exists among us today." Among the many who protested the suppression of the novel were F. Scott Fitzgerald, Ernest Hemingway, Sherwood Anderson, George Bernard Shaw, E. M. Forster, Virginia Woolf, Rudyard Kipling, and Mrs. Ralph Pulitzer. The book remained contraband in England until 1959. (Inventory #: 019218)
$1250.00 add to cart or Buy Direct from Charles Agvent
Share this item