De Humani Corporis Fabrica Libri Septem [On the Fabric of the Human Body in Seven Books]. 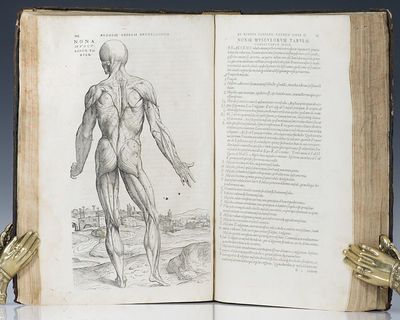 by Vesalius, Andreas
Basel: Ex Officina Joannis Oporini, 1543. First edition of the most important and influential book in the study of human anatomy and "one of the most beautiful scientific books ever printed"(Grolier). Folio, bound in full 18th century calf, woodcut title page with Vesalius performing a dissection, woodcut portrait of the author, over 200 woodcut anatomical illustrations, including 21 full page and 2 folding-sheet figural woodcuts of the skeletal, muscular, vascular and nervous systems. In very good condition with some light dampstaining to some page edges. Rare and desirable, especially in contemporary calf. A splendid example of Vesalius' masterpiece, one of the most monumental achievements in the history of both medical education and printing. Sixteenth century Flemish anatomist and physician Andreas Vesalius studied medicine at the University of Paris and received his doctorate in medicine from the University of Padua in 1537. The University of Padua was home to the most prestigious medical school in Europe at the time yet based its curriculum primarily on ancient and erroneous understandings of the human body, still holding to the anatomy of ancient Greek physician and surgeon Galen. On the day of his graduation, Vesalius was immediately offered the chair of surgery and anatomy at Padua. There, he produced his monumental anatomical study, De humani corporis fabrica (On the Fabric of the Human Body), a collection of anatomically illustrated books based on his Paduan lectures, during which he deviated from common practice by dissecting a corpse as a part of his teaching lecture. Dissections had previously been performed by a barber surgeon under the direction of a doctor of medicine. Shortly after his first lectures, a judge of the Paduan criminal court made available to Vesalius the bodies of executed criminals, which provided him with sufficient specimens to produce, at the age of twenty-nine, his monumental anatomical study. The importance of the Fabrica in the history of medicine can scarcely be exaggerated. Vesalius revolutionized the study of medicine and practice of surgery with his insistence that anatomical knowledge must be derived from firsthand dissection and study of the human anatomical structures. Insisting on empirical observation, the Fabrica "undermined the widespread reverence for authority in science and prepared the way for independent observation in anatomy and clinical medicine" (Garrison-Morton). Throughout the books, the remarkably accurate text is coupled with woodcut anatomical illustrations of artistic and technical brilliance in a comprehensive study of bones, muscles, blood vessels, nerves, abdominal viscera, thoracic organs and the brain. "Galen was not merely improved upon: he was superseded; and the history of anatomy is divided into two periods, pre-Vesalian and post-Vesalian" (PMM). The unprecedented detail of the illustrations would not have been possible without the many artistic developments in the fine arts that had been made during the Italian Renaissance, particularly in literal visual representation and the technical development of printing with detailed woodcut engravings. (Inventory #: 30020)
$300,000.00 add to cart or Buy Direct from
Raptis Rare Books
Share this item

Montage of a Dream Deferred.

New York : Henry Holt and Company , 1951
(click for more details about Montage of a Dream Deferred.)

London : Hamish Hamilton , 1971
(click for more details about The White Nile.)
View all from this seller>