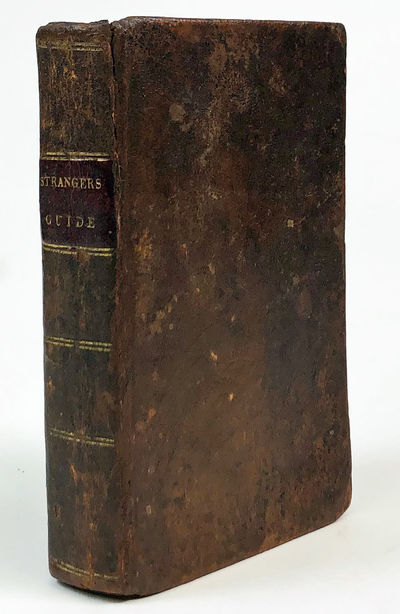 by Blunt, Edmund M. [Busby, Charles A.; Hooker, William]
New York: Printed for, and published by Edmund M. Blunt, at the Quadrant. 1817. J. Seymour, print., 1817. First edition. Contemporary calf, red morocco spine lable titled in gilt. A very good copy, calf rubbed, worn just at the lower fore corner, edges, preliminaries, and rear matter foxed with some minor staining, map with edges soiled and minor wear, a few pin holes and some archival repairs to the fold with minor loss.. xvi, (13)-306, +[6] ad pp. Illus. with engraved folding plan and three engraved plates. adv. with three wood engravings. 12mo. 14.5 x 9 cm. (5 3/4 x 3 1/2 inches). One of the earliest guidebooks of New York, preceded only by Mitchill's "A Picture of New York" (1807). Blunt notes in his introduction that Mitchell's work possessed "considerable merit" but since it was not improved or updated, New York's progress had gone unrecorded: "Until the recent triumphs of the arms of the United States, the inhabitants of these fertile regions were regarded, in many parts of Europe, particularly in the mother country, as a nest of demi-barbarians, utterly unacquainted with the useful arts, and destitute of every social virtue!. . . By giving correct views of our establishments, the strong hold of prejudice, now shaken to the centre, will ultimately be broken down," (p. iv). The map of lower Manhattan, "Plan of the City of New York" running from the Battery to 29th street (28.5 x 32 cm), engraved by W[illiam] Hooker, identifies ninety-eight points of interest. William Hooker (1782-1856) had worked for Blunt when Blunt was located in Newberryport, Mass., and eventually returned to New York City in 1815 to assist in the production of this work and produce the city plan for it, which would be the basis for a series of pocket plans and maps of New York by Hooker. The three plates, (engraved by Hooker) illustrate the Prison, the Almshouse, and City Hall, and were drawn by C[harles] A[ugustin] Busby (1786-1834), an English architect. A more complete sense of its contents can be gleaned from the book's full subtitle: "Comprising a description of public buildings, dwelling houses, including population, streets, markets, public amusements, the bay, harbour, docks, slips, forts and fortifications:--with an account of the literary, philosophical, medical, law, religious, and benevolent institutions, commercial establishments, manufactures, &c.: To which is prefixed, an historical sketch, general description, plan and extent of the city: With an appendix, containing the time and sailing, and departure of steam-boats, stages, &c. with the fares: rates and regulations of hackney coaches, carters, porters, chimney-sweepers, weigh-masters and measurers: market regulations, assizes of bread, money tables, corporation laws and ordinances, inspectors of native produce, masters and wardens of the port, pilots, slave regulations, &c. &c." A contemporary review noted: "This is a very useful publication; full and accurate. The body of the work is important to the stranger, as it points out whatever is worthy of examination in the city, and, also,the readiest means of access to the repositories of literature and the arts. The appendix contains an abstract of the municipal regulations of New York, and will be found a great convenience both to the resident and foreigner, as it enables them to guard against imposition, and points out the proper modes of redressing the injuries, to which every person ignorant of the law, is continually liable. It contains well-executed engraved views of some of the most considerable public buildings, and is accompanied by an excellent map, which exhibits not only a plan of the city. but also a directory to all the public buildings of every description," (American Monthly Magazine, No. 1, Vol. II Nov. 1817, p. 72) . Subsequent editions were published by A. T. Goodrich under title: The Picture of New York, and [or the] Stranger's Guide. Uncommon, especially with the map intact. Sabin 6033. Howes B557. Amer. Imprints 40278. Rink: 327. Eberstadt 115-0787. DAB IX: pp. 200-201. (Inventory #: 44428)
$1,850.00 add to cart or Buy Direct from
Kaaterskill Books
Share this item

Buenos Aires : Ediciones Sirirí , 1980
(click for more details about Somos Sauces)
View all from this seller>