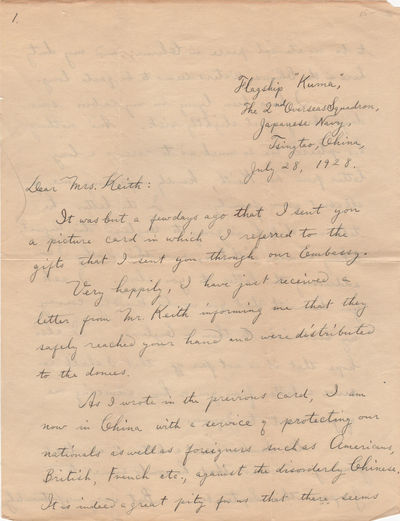 by [Japanese Navy] Hamanaka, K. [Kyoho]
Tsingtao, China, 1928. Very good, light browning and chipping to edges, tiny tears along folds, contents fine.. 5 pp. 8.5 x 11 inches. July 28, 1928 with envelope addressed to: Mrs. J.D. Keith / 218 Carlisle Street /Gettysburg, PA. (wife of John D. Keith, prominent attorney and director of many companies). Officer Hamanaka writes this while the Kuma was on patrol in Tsingtao, under the "...service of protecting our nationals, as well as foreigners such as Americans, British, French, etc. , against the disorderly Chinese." The Japanese occupied the city in 1914, but Chinese rule, under the Republic of China, was returned in December 1922. However, the Japanese maintained its economic control and hence the Kuma's presence. The Kuma, lead vessel of the five Kuma-class light cruisers in the Imperial Japanese Navy, had been originally assigned to cover the landings of Japanese troops during the Japanese intervention in Siberia against the Red Army. The contents are a mix of greetings to people in Gettysburg and military anecdotes. Officer Hamanaka tells Mrs. Keith, "Since I took my new duty in the Chinese waters, I have met many of my old friends at Washington. As you know, your country has sent more that 60 men of war to the Chinese waters, and ours about 40. So, naturally, we are always in contact with some of your officers....It was just a month ago that we exchanged wardroom officers' call between the "Trenton" (one of your cruisers lately came to Chinese waters from America directly) and our "Kuma" , and during the merriest time we had in talking, one of your officers said to one of ours that he knew a Japanese officer called "Hama" at Washington. I was just a few steps apart from him, but could not hear what he said. The Japanese officer who was spoken to said, "Hama? Wasn't he rather a short fellow?" "He's here before you." said he, tapping my shoulder. It was indeed very funny that both he and I could not recognize each other. I spent one evening with him at a dinner in Washington, and yet both could not recognize here at a port in China, because both wore uniforms this time instead of civilian clothes." Kyoho Hamanaka had been assistant naval attached in Washington in 1926, and beginning in 1936 naval attaché to the Japanese legation in Mexico City. The Mexico Embassy was responsible for sending Washington intelligence back to Japan and for trying to keep the Mexicans and Latin America neutral. He was arrested in February 1942, the FBI also believing he boasted of planning for an invasion of Mexico. (Inventory #: 44414)
$250.00 add to cart or Buy Direct from
Kaaterskill Books
Share this item