Toward Modern Art: From Puvis de Chavannes to Matisse and Picasso 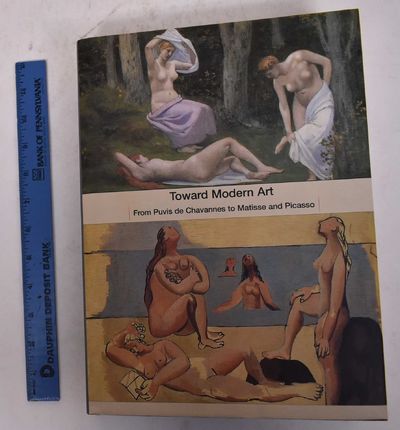 by Lemoine, Serge
New York: Rizzoli, 2002. Hardcover. New. Black cloth boards with silver stamped spine lettering. Color-illustrated dust jacket with black lettering. 567 pp. Mainly color illustrations. "This catalogue of the exhibition at the Palazzo Grassi in Venice presents a ground-breaking interpretation of the birth of modern art. Serge Lemoine, curator of the exhibition and director of the Musee d'Orsay, proposes that "modern art does not descend, as is commonly thought, from Manet and Impressionism, but from ... the French painter Pierre Puvis de Chavannes (1824-1898)." The author of monumental mural decorations in such civic buildings as the museums of Amiens, Lyons, Rouen, the Pantheon and the Sorbonne, Puvis de Chavannes had a remarkable influence on his contemporaries in France and abroad, including Seurat, Gauguin and Cezanne, as well as on later generations of artists. Equally indebted to Puvis de Chavannes are the great European symbolist painters, from Munch to Hodler. However, perhaps his most prestigious modern acolytes were Picasso and Matisse, who remained loyal to him all their lives." "This volume features detailed scholarly contributions analyzing Puvis de Chavannes's work and all his affiliations, as well as offering rich critical and documentary data on his numerous and notable disciples. Accompanied by over five hundred illustrations, this volume is a superb evocation of a period of great artistic ferment and outstanding creativity."--Publisher's description. (Inventory #: 170194)
$55.00 add to cart or Buy Direct from Mullen Books
Share this item