UNIVERSAL DECORATOR THE FIRST SERIES, COMPLETE IN ONE VOLUME (THREE VOLUMES IN ONE).|THE 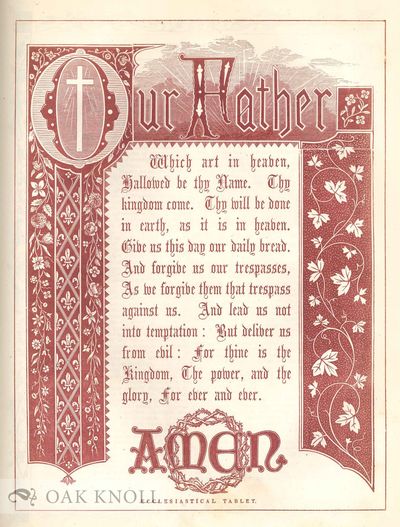 by Thompson, Francis Benjamin and John Wilson Ross (editors); illustrated by William Gibbs
London, United Kingdom: Houlson & Wright, 1859. blindstamped cloth. Color Printing. 4to. blindstamped cloth. viii, 104, [2],104, [2], 84 pages. First edition. Many plates, mostly duotone. Typography and ornament are the subject treated by most of the plates. Bookplate of Isaac Adams, as well as his inscription, on FEP. Adams (1802-1883), based in Boston, was an important inventor in the printing field. His most important invention was the Adams Power Press, which, from its invention in 1827, was used widely in bookbinding for the rest of the 19th century. The machine greatly decreased the cost of producing books, and thus was instrumental in the explosion in the sale of books. This publication certainly devoted much space to printing aesthetics, but it should not be overlooked that as its title implies, it covered the wide range of decoration, applied and fine arts, including designs for cabinetry, metalwork, woodcarving. Designs pertinent to printing include typographical, monograms and initials and more general ornamental ones. The spine has had some repairs at the extremities. Otherwise, tight and clean within. (Inventory #: 133719)
$688.00 add to cart or Buy Direct from Oak Knoll Books
Share this item