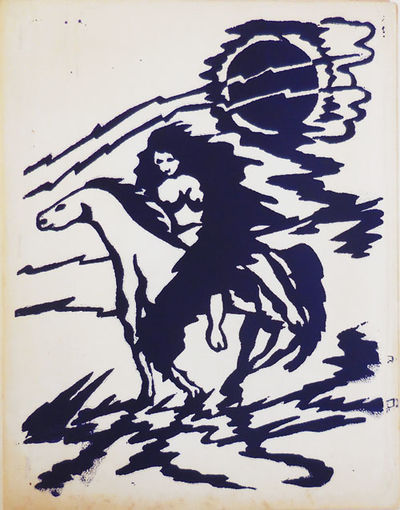 by Cleveland School - d. a. levy / r. j. s. / T. L. Kryss / D. r. Wagner
Cleveland: Ghost Press, 1968. First edition. Paperback. Very Good +. 4to. STapled mimeograph typescript pages with silkscreen cover by Kryss. One of only 255 "vanishing" copies published by the Ghost Press in Cleveland. Book contains poems and silkscreens by the four contributors. A tribute to Rev. John R. Scott, who was sentenced in 1968 to two years in the Cuyahoga County (Ohio) Workhouse on charges of contributing to the delinquency of a minor. Light staining to lower edge of front cover, else an exceptionally nice example of this Cleveland poetry rarity. (Inventory #: 27403)
$600.00 add to cart or Buy Direct from Derringer Books
Share this item
Derringer Books
Offered by