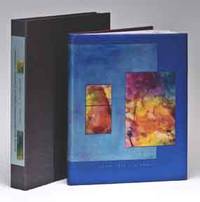 by Curry, Coleen (Binder). Wequetequock Cove Editions. Sacre, James
Stonington, CT: Wequetequock Cove Editions, 2012. Artist's book, in a unique binding by Coleen Curryone of 30 copies with text printed on Velin d'Arche, the original watercolor that is the frontispiece is on Sekishu Japan paper, as are the four copperplate engravings, all copies signed by the artist, the author, and his translator, Joshua Watsky, who is also the publisher. Page size: 12.8 x 9.8 x 1/2 inches; 32pp. Bound by Coleen Curry: full goat cerulean blue leather binding with laced on boards with magenta buffalo leather edge to edge doublures; inlays of hand dyed, embossed, and painted goat and calf leathers with painted incisions; title, author, and artist hand tooled in turquoise metallic foil; top edge painted with acrylic, polychrome silk end bands, Green Mokuba backed with blue Lotka paper fly leaves; original wrappers bound in; signed on rear inside cover with binder's device and stamp; housed in magenta / grey cloth over boards clamshell box with title, author, and artist printed in black on blue paper spine label; small onlays in similar design and colors to those larger ones on binding panels.
Baltazar's hand watercolored wrappers are on a sky-blue ground with white negative space, lighter and darker blue and mauve lines extending horizontally across the wrappers, title printed in black letterpress on front panel and on spine. There are eight gatherings of four pages each of this bi-lingual edition. The text is set in 12pt. Helvetica by Francois Huin and printed letterpress. The four copperplate etchings were editioned at Atelier Alain Piroir in Montreal. The etchings are hand water-colored and highlighted with colored pencil by the artist, Julius Baltazar.
Julius Baltazar (1949-), a noted French painter and printmaker has worked with major poets and writers to create livres d'artistes of the highest quality. In the early part of his career, he was championed by Dali, and the resulting influence of surrealism can be seen in his work where words and image create images of haunting beauty. This is a series of four poems by James Sacre - the French text appearing on the recto opposite the colored etching and Joshua Watsky's sympathetic English translation on the verso.
James Sacre (1939-), noted French poet, was born in the Vendee and, after traveling extensively (US, Italy, Tunisia and Morocco) now lives in Montpellier. He taught at Smith College from 1972 to 2001 and remains the Doris Silbert Professor Emeritus in the Humanities. His verse has a keen sense of place, as evidenced here in these four pieces inspired by a trip through New Mexico and Arizona and Death Valley, CA in 2009. The rural landscapes are compared to the Vendee of his childhood as he conjures up a conversation with his father, reminiscences and subsequent musings on man's relationship to the land. Baltazar's colorful and capacious etchings are suited to the "big sky" of the western US yet intimate enough to perfectly embody these personal reflections of the poet.
Joshua Watsky, American teacher, translator and poet, is the publisher as well as translator of this livre d'artiste. He has worked with Baltazar several times collaborating on splendid bi-lingual editions.
Coleen Curry has provided this binder's statement: The vivid etchings and watercolors by Baltazar were my immediate inspiration - driving across vast expanses and catching the scenery in a blur of motion filled colors. Sacre's poems reminisce landscapes from his childhood days; and I thought about how many of my memories are a blur of textures and colors. There is a line in the second poem, "Bloomfield, New Mexico July 29, 2009": "Habits of birds, I think back on it / Because a hummingbird was just dancing / In the wind against a backdrop of darkening clouds..."
This is a lovely book, an important bi-lingual text, confirming the universality of sympathies regarding land and family. Curry's binding is gorgeous - the blue leather capturing the "big sky" of the west, the iridescent lettering in blue (on blue) suggesting desert mirages. The painted leather onlays in magenta, yellow, orange, green, blue and red draw the viewer into the book. Sacre's considerations of that area of the American southwest, with Baltazar's boldly colored and capacious prints are so full of energy and motion, the reader-viewer eagerly joins the author, translator, and artists on their road trip. (Inventory #: 11398)
$9,500.00 add to cart or Buy Direct from
Priscilla Juvelis
Share this item

Since man began to eat himself. Six authors, six etchings and one drawing in seven plates by Warrington Colescott

Mt. Horeb, WI : The Perishable Press , 1986
(click for more details about Since man began to eat himself. Six authors, six etchings and one drawing in seven plates by Warrington Colescott)

Richmond, VA 2020
(click for more details about The Good Woman)
View all from this seller>