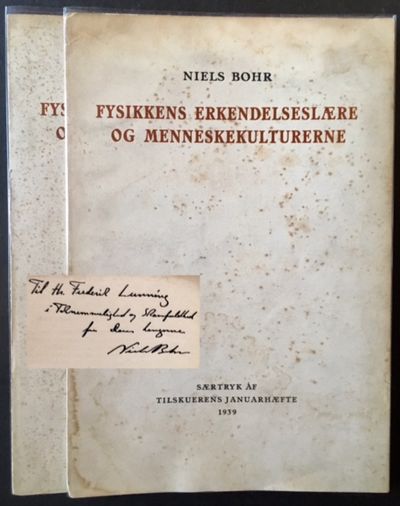 by Niels Bohr
Saertryk AF: Tilskuerens Januarhaefte, 1939. Original wraps. Very Good. A remarkable Association copy: INSCRIBED BY NIELS BOHR (a major pioneer in the study of atomic structure and quantum theory and the winner of the 1922 Nobel Prize in Physics) TO FREDERICK LUNNING (who headed Jensen, the internationally-known silver and Scandinavian design firm). These lectures, loosely translated as "Atomic Physics and Human Knowledge" or "Epistemological Physics and Human Cultures", were held at Kronborg (Helsingor, Denmark) during the August 1938 International Congress of Anthropology and Ethnography. Tight and VG in their sewn wrappers, with pronounced foxing at the front panel and light soiling to both panels. Still though, very presentable and, internally, very clean. Octavo, includes a second, unsigned copy as well, which also is VG and shows similar spotting (foxing) to the front panel. (Inventory #: 16796)
$5,000.00 add to cart or Buy Direct from Appledore Books
Share this item
Appledore Books
Offered by

Tacoma and Seattle : Museum of Glass and University of Washington Press , 2009
(click for more details about Preston Singletary: Echoes, Fire, and Shadows)

Nightstand Books , 1961
(click for more details about Sex Pawn)
View all from this seller>