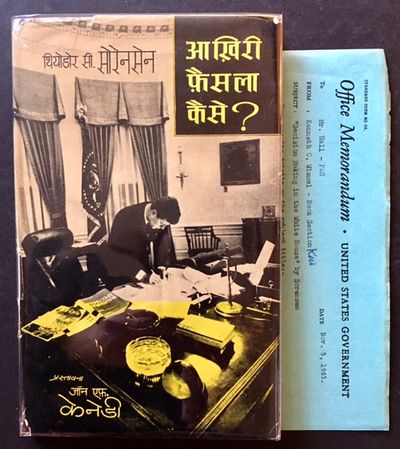 by Ted Sorensen
Allahabad, India: United Publishers, Allahabad, 1965. Boards. Near Fine/Very Good +. A wonderful political curiosity. The July 1965 1st Hindi edition of Ted Sorensen's 1963 "Decision-Making in the White House", limited to 5,000 copies. This was Ted Sorensen's personal copy and it includes a laid-in Office Memorandum from the United States Government, mapping out the different exotic translations of Sorensen's highly-regarded insider's view of the JFK White House (including translations into Tamil, Malayan, Gujerati and Marathi as well as Hindi). This, the Hindi edition, has held up very well. Clean and Near Fine in a crisp, VG+ example of the pictorial dustjacket (showing JFK hard at work in the Oval Office), with light chipping running along the spine and one scuff mark to the rear panel. Octavo, translated from English into Hindi by Nand Kishore. (Inventory #: 16804)
$500.00 add to cart or Buy Direct from Appledore Books
Share this item
Appledore Books
Offered by