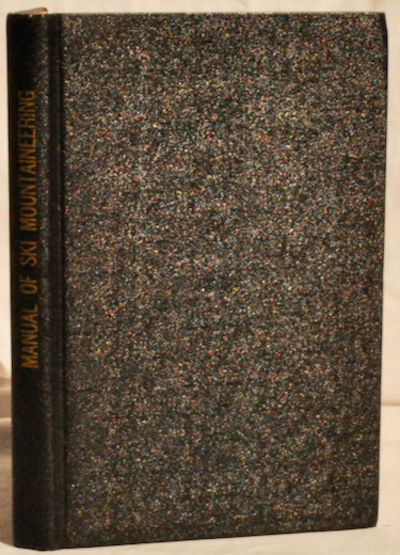 by David Ross Brower (1912-2000), editor
Berkeley and Los Angeles: University of California Press, 1946. Second Edition. Hardcover. Very Good. SECOND EDITION. 12mo. 7 3/8 x 4 7/8 inches. xxiv, 200 pp. Half-title, black-and-white photographic frontispiece, Preface to the Second Edition, Preface to the First Edition, introduction, tables throughout, illustrations throughout, appendix with check list of ski mountaineering equipment, bibliography; text clean, unmarked. Black cloth over boards, spine titled in gilt; binding square and tight, light shelf wear. Ink notations in rear endpapers. WY716-44. Very Good. Editorial committee includes Lewis F. Clark, Alex Hildebrand, Joel H. Hildebrand, Richard M. Leonard, Einar Nilsson, and Bestor Robinson. This work is a collaborative effort between the Eastern Amateur Ski Association, the California Ski Association, and the US Army's Advisory Committee on Equipment and Technique to develop a set of standards by which individuals and those observing them to judge whether a given skier has developed sufficient proficiency in ski touring to enable them to safety undertake and enjoy the sport, and to provide a training manual for soldiers in the field of ski mountaineering. As a young man, David Brower was a prominent mountaineer. He was also a prominent environmentalist and the founder of many environmental organizations, including the John Muir Institute for Environmental Studies, Friends of the Earth (1969), the League of Conservation Voters, Earth Island Institute (1982), North Cascades Conservation Council, and Vote of the Earth conferences. He was the first Executive Director of the Sierra Club (1952-1969) and served on the Board of the Sierra Club from 1941-1953, 1983-1988, and 1995-2000. See: Wikipedia. (Inventory #: WY716-44)
$25.00 add to cart Available from
John Howell for Books
Share this item