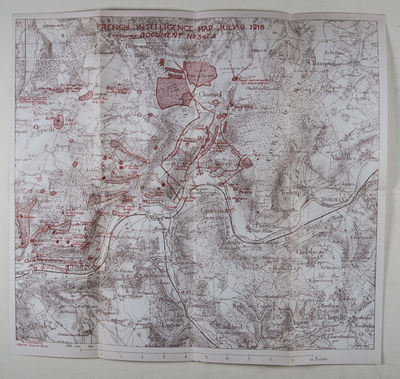 by n/a
Fort Leavenworth, KS: General Service Schools Press, 1923. First edition. Hardcover. g+ to vg-. Quarto. (xiii) 910pp. + 7 folded maps. Green buckram boards with gilt lettering on the front cover and spine. This work is a thorough and exhaustive examination of the Second Battle of the Marne, starting on July 18th 1918, during WWI. The battle, considered the last major German offensive on the western front, culminated with a German defeat, which ultimately paved the way for an allied victory, and armistice in November of that year. The book includes countless statistical charts and tables throughout the text, and is composed of 650 individual war documents. Includes 7 folding maps, of incredible detail, located in a pocket at the interior back cover of the book (although the table of contents lists 8 maps). This copy contains the signature of the previous owner, Major Joseph F. Cottrell of the U.S. Army Coast Artillery Corps (CAC), on the interior front cover. Binding with some light rubbing to extremities. Some light abrasions to the covers. Binding slightly shaky. Starting at the title page, and interior back cover. Missing one of the folding maps at the back. Binding and interior in good+ to very good- condition overall. (Inventory #: 45108)
$300.00 add to cart or Buy Direct from
Eric Chaim Kline Bookseller
Share this item