To the honourable Thomas White, Minister of the Interior [petition of dissatisfied Temperance Colonization Society scripholders] 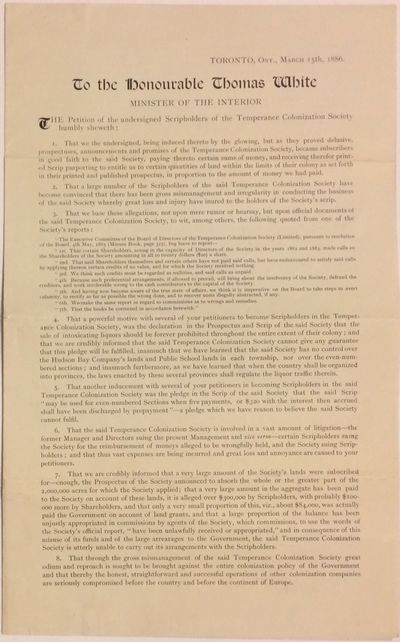 Toronto, 1886. Two-page printed petition on a single folded sheet; 8.25x13.25 inches, horizontally fold-creased, with some splitting at the ends of the folds. Not found in OCLC as of February 2019. The Temperance Colonization Society, established in 1881, sought to establish an alcohol-free community on the prairie. The TCS obtained a large swath of land in Saskatchewan from the Canadian government, and sold scrip to prospective settlers who planned to farm it. The scrip could then be used to claim land in the settlement. Colonization was not as smooth as had been promised, however, and during this period the flow of settlers slowed to a trickle. The present document, a formal complaint by scripholders of the TCS, states that the original prospectuses and advertisements had been glowing, but "...a large number of the Scripholders of the said Temperance Colonization Society have become convinced that there has been gross mismanagement and irregularity in conducting the business of the said Society whereby great loss and injury have inured to the holders of the Society's scrip." The settlers had learned that the Society had no real legal authority to prevent the sale of liquor throughout the territory, that the Society was riven by lawsuits, and that the scrip they had purchased for reserving land could not be used as promised. The petition ends with three possible solutions to the crisis, including the possible closure of the Society. The TCS did finally dissolve in 1891, a year after the first railroad reached Saskatoon. The original settlement is known today as Nutana. (Inventory #: 234731)
$950.00 add to cart or Buy Direct from Bolerium Books
Share this item