Join the Long Walk for Racial Justice. From Goddard College in Vermont to Harvard Square in Cambridge 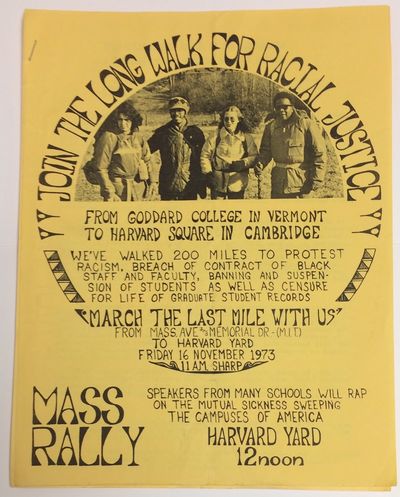 Cambridge, MA: Rally for Justice, 1973. Two 8.5x11 inch leaflets stapled together at corner; the second leaflet is headlined "Otis McRae blasts racism at Goddard College, a 200 mile walk to address rally at Harvard." Mild handling wear. The second leaflet discusses controversies and protests at Goddard over cutbacks of Third World Studies programs. An article about the rally in the November 17, 1973 Harvard Crimson said that "Otis McRae, former non-resident trimester coordinator for Goddard College in Plainfield, Vt., spoke on the steps of Memorial Church at the rally, which marked the end to an 11-day journey McRae and three companions made to Harvard to dramatize charges of racism at Goddard...Although leaflets advertising the rally said McRae, Charles Johnson, Mary Kacen and Steve Guerra had walked 200 miles 'for racial justice,' Kacen told The Boston Globe that the walk was discontinued in southern New Hampshire, near Concord. From there the group visited college campuses throughout New England by car before coming to Cambridge, Kacen told the Globe... Shouting into the microphone, McRae told the crowd he was disappointed by the turn-out [of about 110]. 'I'm remembering the traditions of Harvard I heard about all my life,' McRae said, attacking 'the concrete and steel' of Harvard and calling for more awareness by colleges of "institutional racism. (Inventory #: 234650)
$95.00 add to cart or Buy Direct from Bolerium Books
Share this item