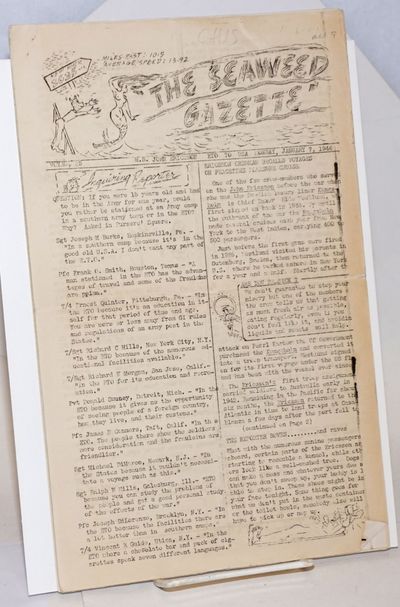 shipboard, the North Atlantic: [crew of the Ericsson]], 1946. Newspaper. Newsletter covering the nine-day crossing, ferrying home demobilized US troops. First eight are single leaves, the last a double, all similarly mimeographed recto & verso on 13x8 inch newsprint, the final "souvenir issue" consisting of two such leaves corner-stapled. Find gossip, cartoons, nutshell interviews, less tedious and stereotyped than one might expect. The paperstock is toned and marred with fold-lines, corner creasings and several short tears. A good set, covering the entire voyage. The paper may have been a fixture on the Ericsson (and perhaps other such ships), providing a forum for various vents: universal seasickness is one of the major topics. Also find rumor-quashing ("Ship's surgeon debunks rumor of G.I.'s death aboard Ericsson"), further tit-bits only alluded to ("Every trip we hear the same rumor and even when we were taking German PWs [POWs] to the States we heard it". A lot of effort went into the Seaweed; for instance the masthead always shows a G.I. wolf at ship's rail hitting on a (well-drawn) mermaid in the water, each day in different poses and situations. The daily vent may have been institutionalized to spike problems with a shipload of shootists. (Inventory #: 234877)
$45.00 add to cart or Buy Direct from Bolerium Books
Share this item