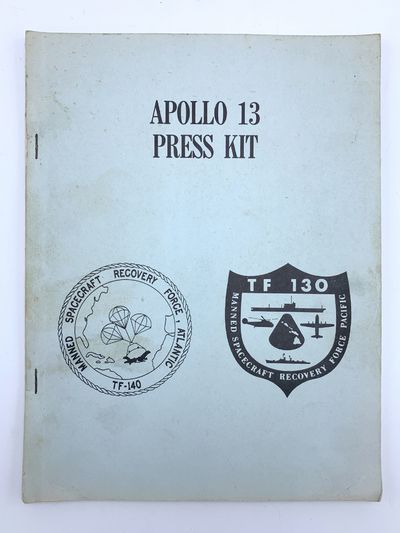 by APOLLO 13
Norfolk, VA: Manned Spacecraft Recovery Force, Atlantic, 1970. A near-fine copy with some minor handling wear at corners and light soiling to front wrapper. 4to (8.5 x 11 inches). [56] pages. Map of lunar mission recovery lines, chart of launch abort area and force deployment, diagram of primary landing area and force deployment. Stapled as issued in pale blue printed wrappers. A scarce survival: the recovery press kit for the Apollo 13 lunar mission, launched to explore the Fra Mauro formation, or Fra Mauro highlands. The mission was commanded by James A. Lovell with John L. "Jack" Swigert as Command Module Pilot and Fred W. Haise as Lunar Module Pilot. The lunar landing was prevented when an oxygen tank explosion in transit to the Moon, destroying the service module's ability to provide electrical power, and threatening its life support systems. The crew returned to Earth safely by using the lunar module as a "lifeboat" for these functions. The command module Odyssey regained radio contact after losing it on reentry, and splashed down safely in the South Pacific Ocean. The crew was recovered by the USS Iwo Jima.

The text includes a chronology of earlier recoveries from manned missions, a history of Task Force 140 and 130, biographies of Rear Admirals William S. Guest and Donald C. Davis, biographies of the recovery ships' histories, and a glossary of terms. The text outlines the support provided by more than 200 individual ships, and numerous aircraft squadrons and underwater demolition teams employed around the world to support the recovery effort, assigned to U. S. Navy Manned Spacecraft Recovery Forces, Task Force 140 in the Atlantic and Task Force 130 in the Pacific. The six different launch abort procedures are described in detail, and charts delineate these various potentials. Accompanied by a black-and-white photograph of Apollo 13. (Inventory #: 404922)
$275.00 add to cart Available from Riverrun Books
Share this item

The Way We Live Now

London : Karsten Schubert , 1991
(click for more details about The Way We Live Now)
View all from this seller>