The Selkirk Mountains: A Guide for Mountain Climbers and Pilgrims 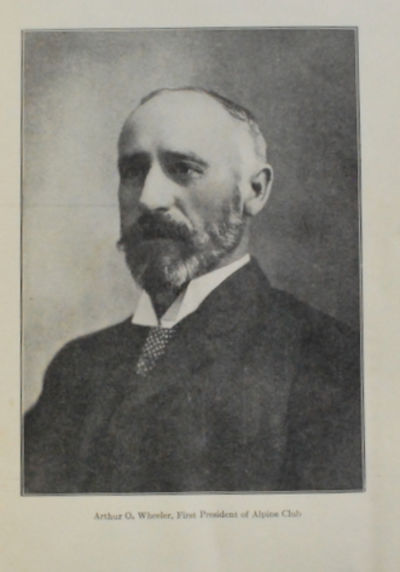 by Arthur Oliver Wheeler (1860-1945) and Elizabeth Parker (1856-1944)
Winnipeg, Manitoba: Stovel Company, 1912. First Edition. Paperback. Very Good. FIRST EDITION. 12mo. 7 1/2 x 5 inches. 191, [9] pp. Black-and-white photographic frontispiece of Arthur O. Wheeler, foreword by the author, "one word more" by co-author Elizabeth Parker, 59 illustrations including 2 folded plates and 6 folded maps, glossary of mountaineering terms, extracts from game laws, park regulations, bibliography, and index; text clean, unmarked. Soft cover brown wrapper with engraved cover illustration; light water damage, binding lightly worn, small tears. Previous owner's list of food consumed in the field in pencil on final leaf. WY716-037. Good. The authors hoped that this early guide to the Selkirk Mountains "will be of use to the mountaineer, and may enable the general public to enjoy more readily the unique alpine beauties of these white-shrouded peaks." Arthur O. Wheeler was a Canadian surveyor and one of the leaders of Canadian Mountaineering and the first co-president of the Alpine Club of Canada. Wheeler is best known for his photo-topographical surveys of the Selkirk Mountains and the British Colombia-Alberta boundary. The text itself is written by Elizabeth (Mrs. H. J. Parker), a Canadian journalist who co-founded the Alpine Club with Wheeler. Botanical notes and accompanying illustrations are by noted author Mrs. J. W. Henshaw, author of "Mountain Wild Flowers of Canada." Notes on animals, birds, and fish by Professor John Macoun, the early Canadian botanist who was the first to survey, document, and categorize Canadian flora in a systematic manner. (Inventory #: WY716-037)
$75.00 add to cart Available from
John Howell for Books
Share this item