THE STARS ARE OURS! 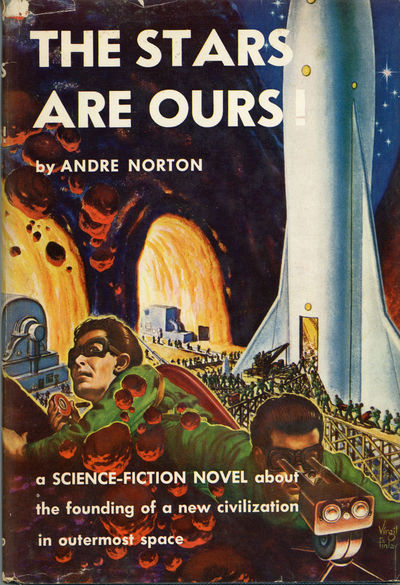 by Norton, Andre
Cleveland and New York: The World Publishing Company, 1954. Octavo, cloth. First edition. Signed on the title page by Norton. Norton's thirteenth book and third science fiction novel. After a nuclear war Earth is a police state ruled by the dictator Renzi his brutal henchmen, the Peacemen. Most of Earth's scientists are enslaved, but a small group of Free Scientists hide out underground. In 2500 they escape to a planet in another solar system where they are menaced by snakelike dragons and make friends with an indigenous race of amphibious beings. "Well plotted, filled with incident, and skillfully written." - Anatomy of Wonder (2004) II-819. A fine copy in good dust jacket with wear at spine ends and corner tips, internal tape mend at upper spine end, and internal foxing with no show through on outer surface. Jacket art by Virgil Finlay. (#162511) (Inventory #: 162511)
$250.00 add to cart or Buy Direct from L.W. Currey
Share this item
L.W. Currey Inc.
Offered by