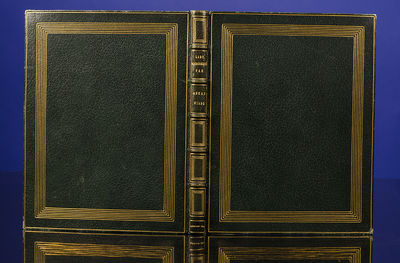 first edition
by WILDE, Oscar; ZAEHNSDORF, binder
London: Elkin Mathews and John Lane at the Sign of the Bodley Head, 1893. I can resist anything except temptation"
"Life is far too important a thing ever to talk seriously about"

WILDE, Oscar. Lady Windermere's Fan. A Play About a Good Woman. London: Elkin Mathews and John Lane at the Sign of the Bodley Head, 1893.

First edition. One of fifty large-paper copies on hand-made paper.

A couple of tiny and unobtrusive minor stains on blank borders otherwise an absolutely fine copy in a wonderful and early, if somewhat austere binding by the great firm of Zaehnsdorf.

Lady Windermere's Fan, A Play About a Good Woman is a four-act comedy by Oscar Wilde, first performed on Saturday, 20 February 1892, at the St. James's Theatre in London. The story concerns Lady Windermere, who suspects that her husband is having an affair with another woman. She confronts him with it but although he denies it, he invites the other woman, Mrs Erlynne, to his wife's birthday ball. Angered by her husband's supposed unfaithfulness, Lady Windermere decides to leave her husband for another lover. After discovering what has transpired, Mrs Erlynne follows Lady Windermere and attempts to persuade her to return to her husband and in the course of this, Mrs Erlynne is discovered in a compromising position. It is then revealed Mrs Erlynne is Lady Windermere's mother, who abandoned her family twenty years before the time the play is set. Mrs Erlynne sacrifices herself and her reputation to save her daughter's marriage.

Oscar Fingal O'Flahertie Wills Wilde (16 October 1854 - 30 November 1900) was an Irish poet and playwright. After writing in different forms throughout the 1880s, he became one of London's most popular playwrights in the early 1890s. He is best remembered for his epigrams and plays including Lady Windermere's Fan, A Play About a Good Woman, his novel The Picture of Dorian Gray, and the circumstances of his criminal conviction for homosexuality, imprisonment, and early death at age 46.

Dot and Tot of Merryland

Paris: Chez Bauger, 1837
(click for more details about Fourberies de femmes)
View all from this seller>