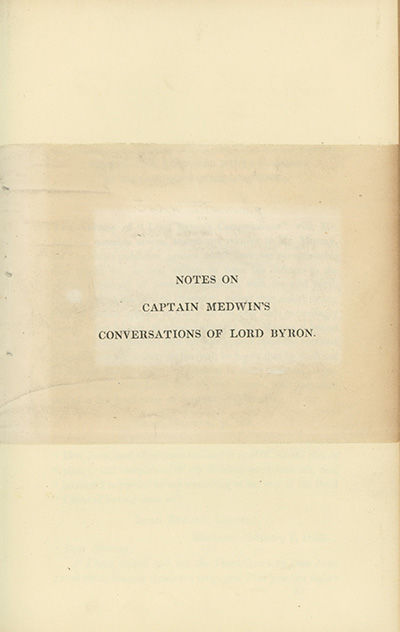 by (BYRON, GEORGE GORDON, LORD). Murray, John
[London: Privately printed by John Murray, 1824.], 1824. First edition. NCBEL III, 297; Chew, Byron in England, page 211. Fine copy.. 8vo, modern red morocco, gilt lettering. A rare privately printed pamphlet by Byron's publisher John Murray, compiled and written in response to Thomas Medwin's Journal of the Conversations of Lord Byron at Pisa (1824), which was notorious for its inaccuracies. Chew describes Medwin's work as a "trumpery affair, giving a fairly amiable impression of Byron, but full of errors and frivolities . . . the whole testimony of Medwin, unless corroborated by reliable persons elsewhere, is worthless." Among those Medwin succeeded in offending was John Murray, who responded by quoting directly from Byron's letters in his possession in the "deadly parallel" format, and in the process revealed interesting publication details about Byron's books and life. The self-wrappers title-page, which did not bear an imprint, lacks the upper and lower blank margins, which have been skillfully replaced. From the library of Byron collector and bibliographer Francis Lewis Randolph (1951-1974), with his bookplate on the front paste-down and his AblÃ¨ Library note in pencil on the rear pastedown. (Inventory #: 27985)
$1,500.00 add to cart or Buy Direct from
Brick Row Book Shop
Share this item

The Tragedy of Richard the Third: With the Landing of Earle Richmond, and the Battell at Bosworth Field. Woodcuts in color by Mary Grabhorn

(San Francisco:) The Grabhorn Press, 1953 , 1953
(click for more details about The Tragedy of Richard the Third: With the Landing of Earle Richmond, and the Battell at Bosworth Field. Woodcuts in color by Mary Grabhorn)

A Coney Island of the Mind. Poems by Lawrence Ferlinghetti. Portraiture by R. B. Kitaj

San Francisco: The Arion Press, 2005 , 2005
(click for more details about A Coney Island of the Mind. Poems by Lawrence Ferlinghetti. Portraiture by R. B. Kitaj)
View all from this seller>