The Travels of the Learned Father Montfaucon from Paris thro' Italy 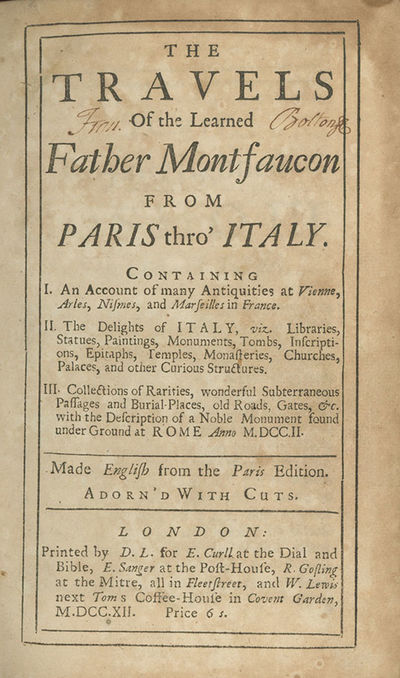 by [TRAVEL & VOYAGES]. Montfaucon, Bernard De
London: Printed by D. L. for E. Curll, E. Sanger, R. Gosling, and W. Lewis, 1712, 1712. First edition translated into English, issue not certain. Pine-Coffin 698; Straus, The Unspeakable Curll, page 217; ESTC T110070; and see ESTC N21633. Text somewhat foxed and browned; binding rubbed; very good copy.. 8vo, contemporary panelled calf rebacked, black leather label, gilt lettering. Five engraved plates (four folding), 15 engravings in the text and vignettes. Â¶ An important work by Bernard de Montfaucon (1655-1741), a French Benedictine monk who was a pioneer in the disciplines of paleography and archaeology. In 1698 Montfaucon traveled to Italy to study antiquities and manuscripts, the results of which were published in Paris in 1702 as Diarium Italicum. It was translated into English in 1711 and published by Edmund Curll. There is an issue with a second title-page that reads "Diarium Italicum: or, a Journey Through Italy, London 1711." It appears, as stated in ESTC, to be the same setting of type as this edition, which has a cancel title-page. (Inventory #: 27989)
$1,250.00 add to cart or Buy Direct from
Brick Row Book Shop
Share this item

London: n. p., [circa 1880-1886] , 1880
(click for more details about Lithographed portrait of James McNeill Whistler, after a chalk sketch by Paul Adolphe Rajon)
View all from this seller>