Paradise Lost: A Poem in Twelve Books and Paradise Regain’d. To which is added Samson Agonistes: And Poems upon Several Occasions. 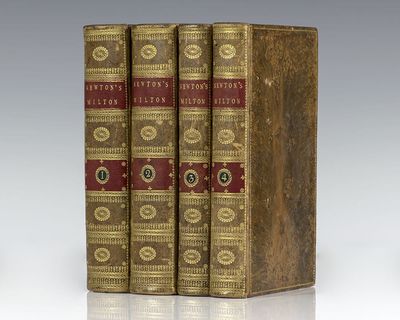 by Milton, John with Notes by Thomas Newton
London: Printed for J.F. and C. Rivington et al, 1790. Eighteenth century example of Milton's masterpiece, Paradise Lost: A Poem in Twelve Books and Paradise Regain'd. Octavo, 4 volumes bound in full contemporary tree calf, gilt titles and tooling to the spine red morocco spine labels, gilt ruled, marbled endpapers, ribbons bound in, all edges speckled brown, engraved frontispiece to two volumes. In near fine condition. A desirable example. First published in 1667, "Paradise Lost is generally conceded to be one of the greatest poems in the English language; and there is no religious epic in English which measures up to Milton's masterpiece... Milton performed an artist's service to his God" (Magill, 511, 515). The writer and critic Samuel Johnson wrote that Paradise Lost shows off "[Milton's] peculiar power to astonish" and that "[Milton] seems to have been well acquainted with his own genius, and to know what it was that Nature had bestowed upon him more bountifully than upon others: the power of displaying the vast, illuminating the splendid, enforcing the awful, darkening the gloomy, and aggravating the dreadful." By 1688, when England was on the verge of the Whig revolution, Milton's reputation had revived considerably. He was commended for his republicanism as well as his record as a defender of liberty. His supporters believed that his greatest poetic achievement merited this handsome, monumental edition. One of the earliest examples of subscription publishing, financed by Lord Somers, the fourth edition of Paradise Lost was the first to be printed in folio format and is the first illustrated edition, distinguished by high quality paper, large, clear type, and ample margins. Milton had previously reorganized the poem into twelve books (by splitting Books 7 and 10 of the original) to parallel Virgil's Aeneid more closely. (Inventory #: 95361)
$1,400.00 add to cart or Buy Direct from
Raptis Rare Books
Share this item

A Summons To Memphis.

New York : Alfred A. Knopf , 1986
(click for more details about A Summons To Memphis.)
View all from this seller>