A Hallowe'en Adventure: A Play For Young People 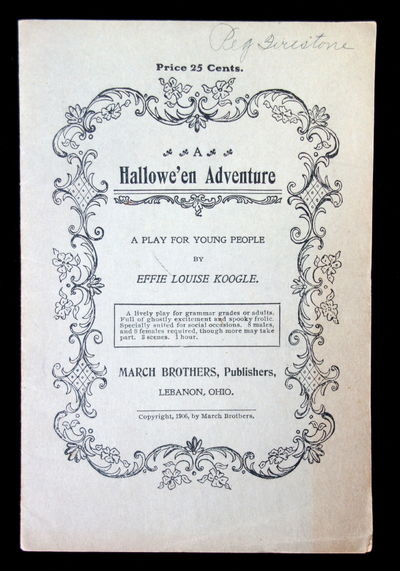 by Effie Louise Koogle
Lebanon, OH: March Brothers, 1906. 26pp. Grey paper wrapper with a decorative border surrounding the title on the front cover. A small box of text in the center describes the play as "full of ghostly excitement and spooky frolic", then gives the run time and actors required for the production. The inside cover lists other holiday-specific plays published by the March Brothers related to Hallowe'en, Armistice Day, and Thanksgiving, as well as two "Americanization Plays" that focus on citizenship and assimilation. And on the back cover, there is an ad for "Fancy Dress Costumes for Masquerade Parties and Entertainments" that lists options for children, women, as well as specific options such as Uncle Sam costumes, colonial costumes, and Santa Claus costumes. Play tells the story of a young girl named Nell Norton and her friends at an all-girls school hatching a scheme to sneak out on Halloween and visit Sleepy Hollow to see some ghosts. Boys from a nearby all-boys school, not allowed to go to the festivities due to a prank the earlier year, learn about the girl's plan and decide to try and scare them by dressing up like ghosts, pretending to capture them, then appearing as famous figures like Rip Van Winkle, Napoleon, and Ichabod Crane. However, Nell and her friend Gloria, while frightened by the fake kidnapping, have fun meeting these ghosts and are disappointed when they must leave. The play ends with the boys taking off their costumes and admitting that Nell and Gloria may have fallen for their trick, but it wouldn't be long before the girls found them out - as one admits, "our humiliation will equal their fright". With obvious admiration for Nell and the girls, they agree that it was all worth it to "clash wits with girls of their caliber". Measures 7 1/4" x 5". (Inventory #: 28001401)
$75.00 add to cart or Buy Direct from Eclectibles
Share this item