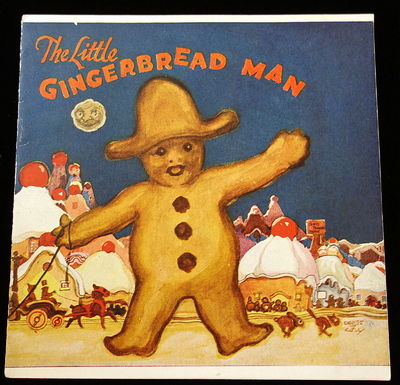 by Charles J. Coll - Illustrator
1923: Royal Baking Powder, New York. This book tells the story of a King, and how on the eve of his daughter, the Princess, he bans any sort of cake or tart in the land because he can't stand his cook's baking. In near by kingdom, the Queen of all the Flour Folk, along with a gingerbread man come up with a plan to overturn the King's edict. Beside the text of the story are several recipes for desserts that use Royal Baking Powder. The recipes in these book, can also be found in t the 'Royal Cooking Book', also published by the Royal Baking Powder Company. At the end of the story there is a note that tells the reader that then can send in for their own copy of the cookbook. The illustrations in this book are colorful and full of whimsy. The artwork is by Charles J. Cory, while the story itself has been attributed to Ruth Plumly Thompson of Oz fame. Measures 7 1/4" x 7 1/4" (Inventory #: 27100201)
$35.00 add to cart or Buy Direct from Eclectibles
Share this item