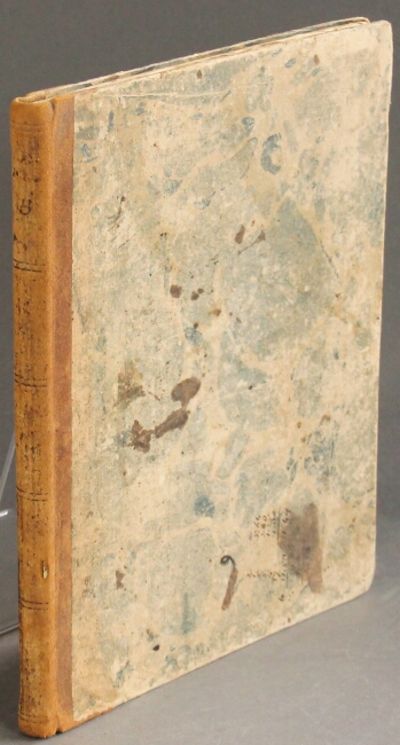 by Whitman, Z[achariah] G[ardner]
[Boston, 1838. 4to, pp. 84; lined notebook approx. 8" x 10", original marbled boards, calf spine; very good. One page loose. Zachariah Gardner Whitman (1789-1840), Justice of the Peace, is the scribe of these records. A son of Benjamin and Hannah (Gardner) Whitman he graduated from Harvard in 1807. The first section of records is military and consists of detailed accounts of complaints, trials, and the fines usually imposed on the convicted. Complainants include Captain Ezra Eaton, Captain Daniel Dunton, Captain Benjamin B. Appleton, Captain Nathaniel Richards and others of the Massachusetts Militia, often stating that men under their command were no shows and deserters. One accused soldier, John Wilkins of Capt. Daniel Gibbons Company, claiming sickness, was observed in "Nantucket two days gunning on the beach" and cutting up "large quantities of pork at his provisions store." Wilkins was fined $7 plus $6.50 process fees, a good sum for the time. Other accused include Thomas Hathaway, Chauncey Owen, Joel Nason, Dean Kimball, Ellis Kingsbury, Phineas Hazleton, William Delano, Charles Mountfort, and many others. The next section deals with short dockets which include plaintiff and defendants' names, officer and fees, court, and result and remarks. Most of these complaints are for debt. At least one record is of a divorce: Dec. 1837- Rebeccah Eastman charged extreme cruelty against Alpheus D. Eastman and prayed for alimony. The last page of the book is written upside down and includes two records of acknowledgements of debts; A. Phelps vs. A. Salisbury et al, and Christian Baker vs. James Murphy. (Inventory #: 53488)
$862.50 add to cart or Buy Direct from
Rulon-Miller Books
Share this item