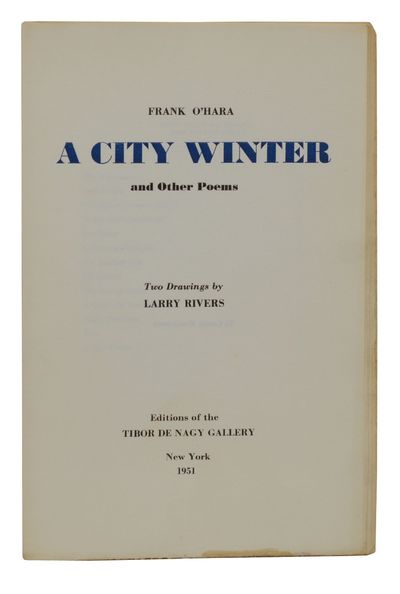 by O'Hara, Frank
New York: Tibor de Nagy Gallery, 1951. First Edition. Unbound. Near Fine. New York School of Poets, Larry Rivers. [1952] First edition. Folded and gathered sheets, unbound as issued; with two reproductions of drawings by Larry Rivers. One of 130 copies in the regular issue [of an edition of 150 total] as per colophon at rear, this copy is unnumbered. Not all copies of the regular issue were bound since there was a large over-run totaling twice the amount specified in the colophon. Perhaps the publisher's ran out of the decorative blue paper for use as covers on these extra copies, which may account for these unbound sets which were distributed as unnumbered "folded paper" copies. Near Fine. Erased bookseller notation and stain to outer blank sheet, which protrudes slightly onto the bottom edge of title page as well, else a lovely copy. Housed in a half black morocco leather solander case stamped in gilt, covered in decorative paper that appears identical to the paper utilized by Tibor de Nagy for covers. A very uncommon collection of the O'Hara's first book, and the first book to be issued in this series by Tibor de Nagy. (Inventory #: 140938018)
$2,650.00 add to cart or Buy Direct from
Burnside Rare Books
Share this item
Burnside Rare Books
Offered by

London : Macmillan & Company Ltd , 1918
(click for more details about Hysterical Disorders of Warfare)
View all from this seller>