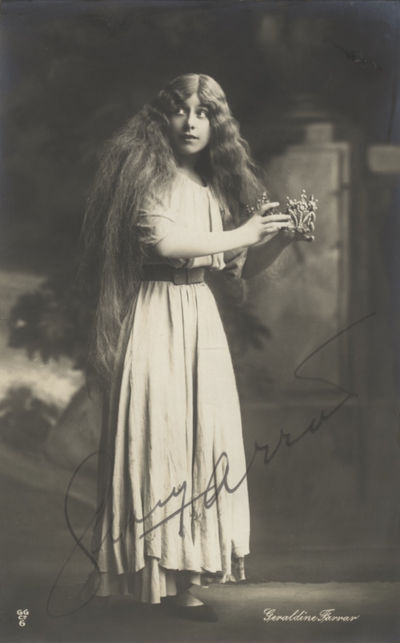 signed
by FARRAR, Geraldine 1882-1967
With "GG Co 6" printed at lower left of plate and "Geraldine Farrar" at lower right.

Laid down to mounting sheet at corners of verso. Geraldine Farrar was an American soprano who "studied in Boston, New York and Paris; soon after her début at the Königliches Opernhaus, Berlin (Faust, 15 October 1901), she became a pupil of Lilli Lehmann, to whose Donna Anna she was later to sing Zerlina at Salzburg. After five years in Berlin, Farrar joined the Metropolitan Opera in New York, where she first appeared as Gounod's Juliet in 1906, and quickly became one of the leading stars of the company. She remained at the Metropolitan until 1922, when she made her farewell as Leoncavallo's Zazà on 22 April. With her personal beauty, clear tone and shapely phrasing she excelled in such lyrical parts as Zerlina and Cherubino, Manon and Mignon, as well as in several Puccini roles, among them the heroine in the 1918 première of Suor Angelica. She was also the first Goose Girl in Humperdinck's Königskinder (1910). Farrar's seductive and strongly personal timbre is well captured on a long series of Victor records, which have been successfully transferred to CD. They offer, among other worthwhile performances, a substantial souvenir of her Butterfly and her Carmen, two of her most popular roles." Desmond Shawe-Taylor in Grove Music Online. (Inventory #: 31118)
$99.00 add to cart or Buy Direct from
J. & J. Lubrano Music Antiquarians
Share this item