Three-quarter length photograph of the noted Italian-born American soprano. Together with an autograph signature on an album leaf dated New York, 1919 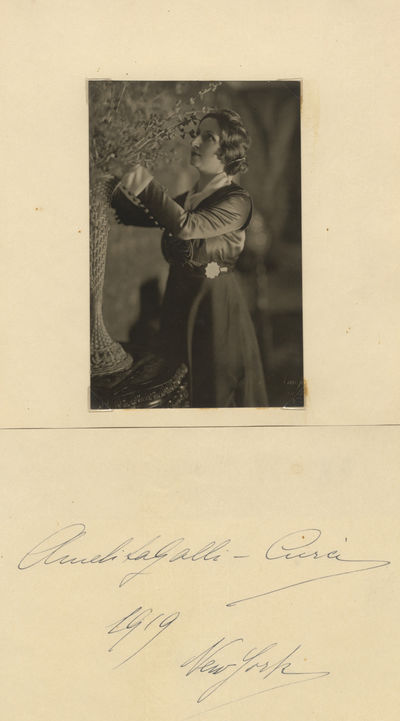 Photograph laid down to mounting sheet at corners of verso. "Galli-Curci made a spectacular début at Chicago as Gilda on 18 November 1916. She remained with the Chicago company for eight consecutive seasons, singing Rosina, Amina, Lucia, Linda di Chamounix, Violetta, Dinorah, Juliette, Manon and Lakmé, and an occasional Mimì and Madama Butterfly. She made her début at the Metropolitan in La traviata on 14 November 1921, appearing as a regular member of the company in these and other similar parts until her farewell in Il barbiere di Siviglia on 24 January 1930... Galli-Curci possessed a limpid timbre of exceptional beauty and an ease in florid singing that sounded natural rather than acquired; her highest register, up to e‴, remained pure and free from shrillness. Her style... had a languorous grace and charm of line capable of conveying both gaiety and pathos. Her numerous Victor records, especially those made before 1925 by the acoustic process, deserved their enormous vogue, being among the best of their kind ever made... " Desmond Shawe-Taylor in Grove Music Online. (Inventory #: 31173)
$72.00 add to cart or Buy Direct from
J. & J. Lubrano Music Antiquarians
Share this item