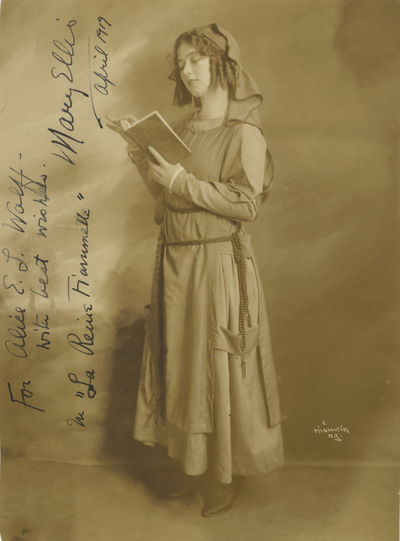 Left edge trimmed slightly unevenly; remnants of adhesive to verso. "After an operatic training [Ellis] appeared in New York at the Metropolitan Opera House during the last days of World War I, where she created the role of the Novice in Suor Angelica and later also sang Lauretta (Gianni Schicchi) during the first run of performances of Il trittico. She sang Giannetta to Caruso's Nemorino and Fyodor to Chaliapin's Boris before turning to lighter music in 1924, when she created the title role in Hammerstein and Friml's Rose Marie, and then began acting in plays and films. Admired by Ivor Novello, she came to London to take the leading female role, that of opera singer Militza Hajos, in the first of his Drury Lane musicals, Glamorous Night (1935), whose success was partly due to Ellis's varied talents." Paul Webb in Grove Music Online