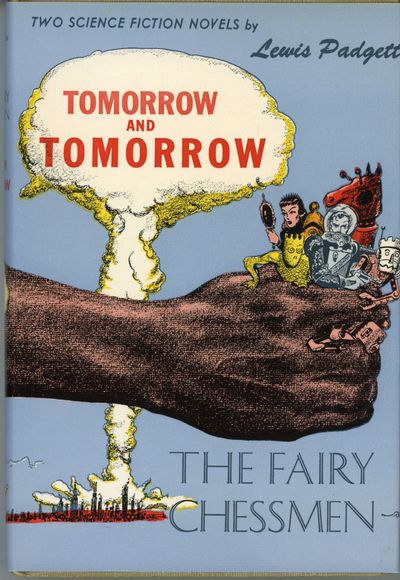 by Padgett, Lewis (pseudonym of Henry Kuttner and Catherine Lucile Moore)
New York: Gnome Press, 1951. Octavo, boards. First edition. Collects two short novels first published in ASTOUNDING SCIENCE FICTION as two-part serials in January-February 1947 and January-February 1946 respectively. "... Kuttner's reputation rests primarily on the literate and sophisticated stories he and Moore wrote for John W. Campbell's ASTOUNDING STORIES during the 1940s ..." - Gunn (ed), The New Encyclopedia of Science Fiction, p. 261. "During the period between 1942 and 1947, Kuttner and Moore contributed forty-one stories to ASTOUNDING -- forty-eight by 1955 -- including three two-part serials and one three-part serial. The significance of their contribution, however, lies not in the quantity nor the continuation of the thrust of Campbell's new ideas about science fiction through difficult years, although these factors are meaningful. They were one (of two or four) of the finest writers to marry magazine science fiction to literary form, to do it sufficiently often to be noticeable and effective, and to do it -- though perhaps without deliberate intent -- with increasing skill ... Their contributions to the wartime magazine period sustained the level of that 'golden age' which had begun around 1938 or 1939." - James Gunn, "Henry Kuttner, C. L. Moore, Lewis Padgett, et al," Thomas D. Clareson, ed, Voices For the Future (1976), volume 1, pp. 191-92. "Two complexly plotted but superior short novels with grim and bitter dystopian views." - Anatomy of Wonder (1995) 3-108. Anatomy of Wonder (2004) II-619. Light damp stains to boards at bottom edges of front and rear covers, a very good copy in fine (as new) dust jacket. (#162570) (Inventory #: 162570)
$150.00 add to cart or Buy Direct from L.W. Currey
Share this item
L.W. Currey Inc.
Offered by