ARCHIVE OF WATERCOLOR & PEN AND INK DRAWINGS DOCUMENTING THE TRAVELS OF A LEGAL CLERK IN 19TH CENTURY ENGLAND 175 watercolors and pen and ink drawings on card stock illustrating the English countryside, landscape and topographical views, drawings of country houses, portraits, and scenes from everyday life, ca. 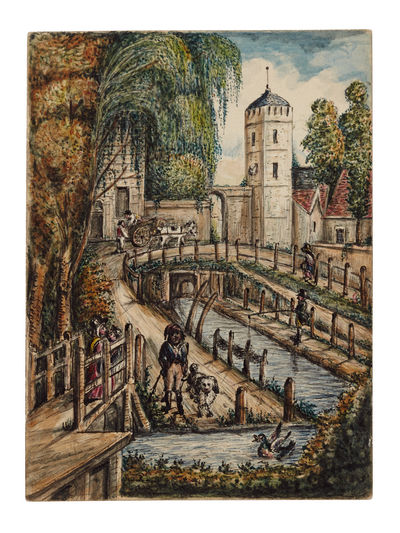 by Bull, William
Original archive of 175 Original watercolors and pen and ink drawings measuring 95 x 125 mm. (3 ½ x 5 inches), a dozen or so at 115 x 155 mm. (4 x 6 inches). 84 illustrations in watercolor and 94 in pen and ink, with some highlighted in color wash. About 20 percent of images are identified on the verso with a hand-written legend. The drawings are in generally very good condition, with a few cards foxed and a few corners bumped. Included are two carte de visite portraits of William Bull and two legal documents which contribute to his biography.
This is a remarkable collection of drawings and watercolors created by a legal clerk who traveled on the circuit with a member of the King's Bench and recorded many of the place, people, and adventures that he witnessed while on the road. His images are charming in their choice of subjects, the detail of their composition, and many are adorned with rich primary colors applied in a deft yet self-trained manner.
Little is known of William Bull but a short typed-written genealogy of the Bull family described him as a bachelor who lived his sister Jane, and that he was a legal Clerk for Justice Joseph Littledale. The genealogy is accompanied by a legal privilege or commission issued in 1825 by George IV granting Bull full power and authority to take "Affidavits" and "Oaths" from the infirmed, justly imprisoned or others who are hindered from coming before a justice and participating in a court procedure. This privilege extended not only to the courts in Westminster but also courts in the counties of Middlesex, Essex, Kent, Surry and Hertford. As his career progressed, he kept Legal Chambers in Constitution Row, and Chancery Lane, Grays in Road before becoming Clerk to Justice Littledale, for whom he worked for many years. According the genealogy William Bull left an estate worth £ 28,000. Also included is an indenture of Samuel Bull, William's half brother and two photographs of William Bull both of him as an old man.
Sir Joseph Littledale, William Bull's employer was a graduate and St. John's College Cambridge, studied law and joined the Northern Circuit where he built a good reputation. In 1813 he was appointed Counselor to the University of Cambridge. In 1824 he advanced to a judgeship to the King's Bench and his tenure was marked by great success. According to an appraisal of the work of the King's Bench during Littledale's tenure that appeared in the Lives of the Chief Justices, John Lord Campbell writes; "Consisting as it did of Abbott, Bayley, Holroyd, and Littledale, the court of king's bench at this time was one of the strongest ever constituted"
As a member of the Northern Circuit, Littledale and William Bull moved from town to town adjudicating cases that had implications for the Crown. It was during this time that Bull made his drawings and documented many of the places in which he and Littedale conducted the cours business. Some of the drawings have manuscript notes on the back in William Bull's hand, identifying the place where the drawings were made. The following is a partial list:
Devonshire: The Birth Place of William Raleigh: Grave Castel, Carmarthenshire
Kingsford Church, Essex Taunton Castle, Somersetshire
West Drayton Church Isfield Church, Suffolk
Remains of Henry II Palace, Woodstock Park Cape Coast Castle
Thomas Coventry, Swindon Burnham Abbey, Buckinghamshire
Tower of Refuge, Douglas Bay Castle at Llansteffan, S. W.
Belle View, Kings Norton, Birmingham Fisher Street, Swansea
View on the Great Ouse River Hudleigh Castle, Essex
St. Laurence's Gate, Drogheda South Gateway at West Drayton
Ancient Vault, Southwark Wolsey's Tower, Esther Place
Cheverell, Wiltshire Prudhoe Castle, Northumberland
Godstow Nunnery, Burial Place of Fair Rosamond Steel's Cottage, Haverstock Hill
Carew Castle, S. W. Locke's Residence, Essex
St. John's Gate, Cambridge Pagoda, Home of Sr. Robert Peel
Pomeroy Castle, Devonshire Church at Swindon
Dictionary of National Biography, Volume 33, pp. 363-4. John Lord Campbell, Lives of the Chief Justices, iii. 291; Autobiography, i. 421. . (Inventory #: 134)
$8,500.00 add to cart or Buy Direct from
De Simone Company
Share this item
De Simone Company, Booksellers
Offered by

Manuscript on paper in English, in ink, and highly legible. Illustrated with mathematical diagrams and 14 illustrations on perspective

[Cambridge ?] 1800
(click for more details about Manuscript on paper in English, in ink, and highly legible. Illustrated with mathematical diagrams and 14 illustrations on perspective)

Paint & Colour Mixing. A practical handbook for Painters, Decorators, and all who have to mix colours. Containing 72 samples of paint of various colours, including the principal graining grounds, and upward of 400 different colour mixtures. .

London & New York : E. & F. Spon, Ltd. & Spon & Chamberlain , 1902
(click for more details about Paint & Colour Mixing. A practical handbook for Painters, Decorators, and all who have to mix colours. Containing 72 samples of paint of various colours, including the principal graining grounds, and upward of 400 different colour mixtures. .)
View all from this seller>