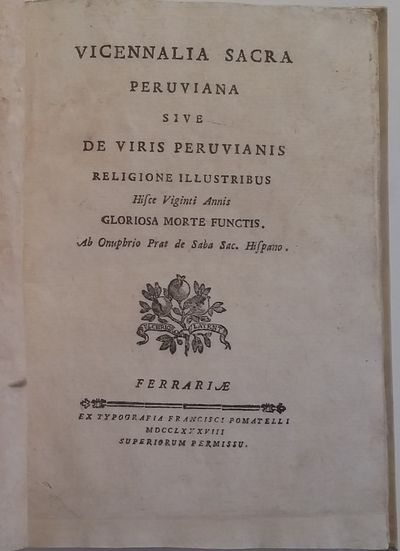 by Prat de Saba, Onofre
Ferrara: ex typographia Francisci Pomatelli, 1788. 8vo. 200 x 140 mm., (8 x 5/1/2 inches). xvi, 200 pp. Twentieth century vellum over boards, title in ink on spine; title-page remargined, a few paper repairs in the text. First edition. In 1767, after nearly a century in Bolivia and Peru, the Jesuits were expelled and many of the brethren returned to Italy. This book by Prat de Saba provides vital information both on the lives of the Jesuits but also of the Moxos Indian Tribe which they converted to Catholicism. It was quickly learned by the Jesuits that the Moxos had a very strong religious culture with a single god and that converting them to Christianity was would take effort but was a real possibility. Each of the fifteen biographies include information on the background of each man, their education, and investiture into the Soceity, as well as descriptions of their previous assignment before going to South America. In addition, there is much information on the social structure of the Moxos tribes, the transformation of the Moxos from a hunter gathers to farmers, as well as discussion of their conversion to Christianity. Sabin 64930. Sommervogel VI, 1173. Encyclopedia Britannica 18, p. 949. OCLC lists copies at the British Library, the Bibliotheque National de France, and the Staatsbibliothek-Berlin. NUC adds copies at the Library of Congress, John Carter Brown Library, University of Utah, and Chicago. It does not appear that a copy has been on the market since the 1935, see Maggs Catalogue No. 612. Spanish America and the Guianna. (Inventory #: 135)
$5,750.00 add to cart Available from
De Simone Company
Share this item
De Simone Company, Booksellers
Offered by