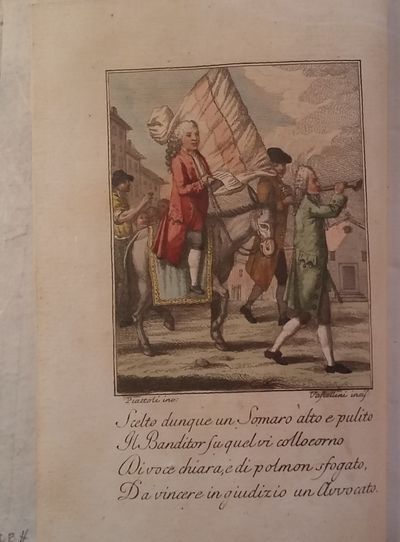 by Rastrelli, Modesto
Firenze: Grazioli, 1791. Small 4to. 175 x 125 mm (7 x 4 ¾ inches). 99 pp. Illustrated with a hand colored engraving designed by Giuseppe Piattoli and engraved by Vascellini. Later decorated paste paper boards. Very good copy. Rare first edition. Very attractive copy of Rastrelli's poem that satirizes a century's old festival originally organized in Florence by Cosimo I after the restitution of his power in 1537. The poem, followed by historical notes on Cosimo's victory, focuses on the losers in that battle, who were made to ride through the city on the backs of donkeys, and receive the wrath of the population and the humiliation that comes with defeat. The engraving is designed by the noted Florentine painter, Giuseppe Piattoli and is characteristic of his playful manner. This copy from the library of Giannalisa Feltrinelli and like so many Florentine illustrated books is very rare. OCLC lists only one copy in London, NUC adds copies at NYPL, Harvard, and Newberry. In addition to the first edition, Rastrelli's Il Palio proved very successful, with later editions printed in 1824, 1825, and 1831, all of which are rare. (Inventory #: 131)
$1,500.00 add to cart Available from
De Simone Company
Share this item
De Simone Company, Booksellers
Offered by