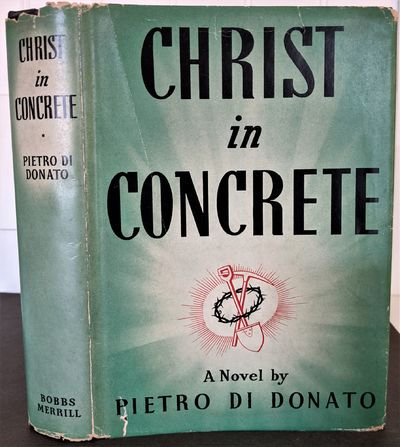 by Di Donato, Pietro
Indianapolis: Bobbs-Merrill Company, 1939. 8vo. 311 pp.  Black cloth boards, image of a "pick and shovel" gilt on upper board and spine; top edge of text with red/orange wash; dust jacket.  This copy is signed by the author on front free endpaper.  Endpapers and pastedowns slightly toned; unclipped dust jacket is supplied; some chipping to the head and tail of spine, a few tears along the edges.  Very good example.

Pietro Di Donato (1911-1992), son of an Italian immigrant from the Abruzzi, wrote this acclaimed novel depicting the immigrant experience in American before the Second World War.  Di Donato used concrete as a metaphor for the modern world, a building material that supplanted the traditional Abruzzese reliance on stone.  In the novel he chronicles the compromises made by an Italian immigrant in order to survive in a world which prized efficiency over craftsmanship. An excerpt of the novel appeared in Esquire Magazine in 1937 and it was adapted into a movie in England in 1949 entitled Give us this Day (U.S. release  Christ in Concrete), directed by Edward Dmytryk.  It won an award at the Venice Film Festival of that year.

Di Donato wrote five novels in addition to Christ in Concrete, including This Woman (1958), The Immigrant Saint: Life of Mother Cabrini (1960), The Penitent (1962) and the American Gospel (2000).  In 1970 an edition of his collected works was published under the title, Naked Author, which includes some of his published articles and reviews. (Inventory #: 6)
$675.34 add to cart or Buy Direct from
De Simone Company
Share this item
De Simone Company, Booksellers
Offered by

Maps and Plans Illustrative of the Canals of Irrigation in Lombardy and Peidmont. Printed by Order of the Hon. the Court of Directors of the East India Company

Edinburgh & London : William Blackwood & Sons , 1855
(click for more details about Maps and Plans Illustrative of the Canals of Irrigation in Lombardy and Peidmont. Printed by Order of the Hon. the Court of Directors of the East India Company)

Life on the Lagoons

New York : Macmillian and Co. , 1894
(click for more details about Life on the Lagoons)
View all from this seller>