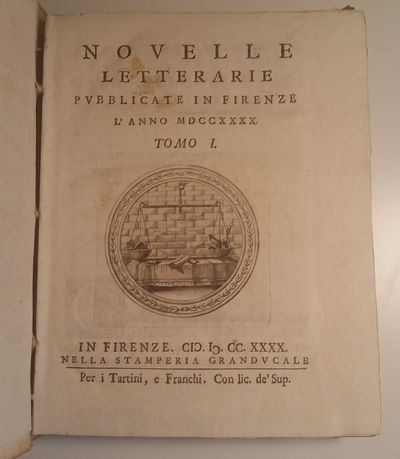 by (Lami, Giovanni)
Florence: All' Insegna del Centauro, 1768. First Series, 27 volumes of 29. 4to. Each annual volume consists of 52 numbers, printed in 8-page issues. Volumes 1-25 bound in publisher's boards; vols 28-29 bound in contemporary half vellum with morocco labels, marbled boards. Missing volumes 26 & 27. Some minor worming at ends of last 4 volumes, otherwise in very good condition; title and index of volume 29 (1768) in facsimile. This rare periodical is a treasure trove of information and a powerful tool for scholars documenting the history of ideas over the twenty-five-year period that it covers. Each volume contains three indexes, one listing the cities where reports originated; a second index for authors and titles of articles; and a third a subject index. For example, in volume I on pages 66 and 68, there is information on recent books that were place on the Index of Prohibited Books. There are also three articles on fables, numerous reports on recent scientific publication issued by various academies, descriptions of ancient costumes, libraries, and museums in Italy and across Europe. Hundreds of reports of human activity are covered in each volume and the indexes, make that information easily accessible to the scholarly community. One of the more interesting aspects of the publishing history of this periodical is Giovanni Lami's decision to create a printing company to produce each issue. In an article by Elisa Marrucchi published in La Bibliofilìa, she describes a series of documents that record the organization of the printing company under the name Stamperia del Centauro. It was financed by a syndicate of eight Florentines and she speculates that the reason for establishing this press, was so it could secure its independence and freedom to publish without fear of local interference. Novelle Litterarie, founded by Giovanni Lami (1697-1770), librarian of the Biblioteca Riccardiana in Florence, is the earliest literary journal printed in Tuscany and voice for literature, science and reform in the Florentine states. It is an innovative weekly focusing on the contemporary debates over education, religion, social reform, literature and science, highlighting not only the intellectual life of Florence but also cultural developments taking place in almost every major Italian city. Novelle Litterarie also contains reports of recent publications and events from other literary centers across Europe and Great Britain. According to his biography in DBI, Lami received and printed over 14,000 reports from correspondence over this 28 year period. Giovanni Lami was sole editor of the First Series, which was published between 1740-68. A second series began in 1770 under a new editor and was published for another 22 years. Lami studied law at Pisa, and philosophy and Greek at Florence, and previously acted as librarian to Gian Luca Pallavicino with whom he travelled widely in Europe; he was made a professor of ecclesiastical history by Gian Gastone di Medici, last Grand duke of Tuscany, whose biography he wrote. Lami was a member of many prestigious Florentine academies and contributed to numerous publications such as the Vocabulario della Accademia della Crusca. His extensive library is now held at the Biblioteca Nazionale Centrale in Florence; his letters and unpublished works are kept at the Biblioteca Riccardiana. This run of Novelle Litterarie is very rare and like the other Italian periodicals that heralded in the Enlightenment in Italy (Novelle della repubblica letteraria, Storia letteraria d'Italia, Giornale dei letterati and Il Café, it is nearly impossible to find in the market. OCLC cites three complete set in the US; Yale, University of Illinois, and UC Berkeley. Cochrane, Florence in the Forgotten Centuries (1527-1800), Chicago-London 1973, pp. 315-396. Elisa Marrucchi, "Giovanni Lami Stampatore". La Bibliofilìa, V. 52. No. 3 (1950), pp. 264-67. Dizionario Biografico degli Italiani, http://www.treccani.it/enciclopedia/giovanni-lami_%28Dizionario-Biografico%29/. Laterza vol. 3, p. 320. Benvenuto Righini, I periodici fiorentini (1597-1950). Florence, Sansoni, 1955, n.1893. Venturi, Italy and the Enlightenment, pp. 273-4. (Inventory #: 37)
$9,750.00 add to cart Available from
De Simone Company
Share this item
De Simone Company, Booksellers
Offered by