American Ornithology; or the Natural History of the Birds of the United States. Illustrated with plates engraved and coloured from original drawings taken from nature 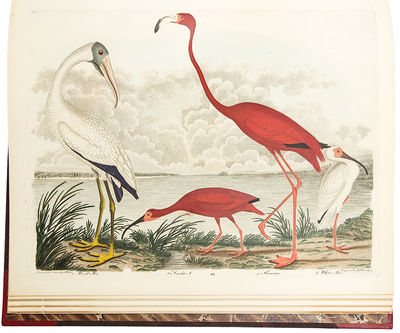 The second full edition of Wilson's work, with plates in their most desirable form, and with the very rare large paper issue of the text. "Science would lose little if every scrap of pre-Wilsonian writing about United States birds could be annihilated" (Coues).

None of the bibliographies that we have consulted mention a "large paper" edition of the 1828-29 American Ornithology, the text of this set is on demonstrably larger paper than the usual 'octavo' copies that we have examined. The present copy is 10 inches, the uncut size of the octavo issue is 9 7/8 inches. Both issues are printed on the same 'Ames / Phila.' wove paper (with a dove of peace countermark): the present quarto issue can be recognised by the presence of the watermark in the middle of the sheet, with the octavo issue the watermark is invariably cut into by the upper or lower margin. The text is identical, but the settings of type must have been placed differently on the form in order to achieve the wider inner margins that are a feature of the quarto issue (2 inches as compared with 7/8 inch). The first edition of Wilson's life-work was published in nine volumes between 1808 and 1814. The present edition was prepared by Wilson's friend and colleague, George Ord, who improved the work textually by re-arranging the work in a systematic order by species and by contributing an important "Sketch of the Author's Life" (pp.vii-cxcix in the first text volume) as well as numerous additional textual notes. He also notes in his preface to the first text volume that he arranged for the plates to be "carefully examined and retouched" by Alexander Lawson (the original engraver of most of the plates). Reading between the lines of Ord's preface, it is clear that he believed the plates in the present edition to be better than the first, and this is the current general view: it is noted in Fine Bird Books that "the plates [are] coloured better," and Wood writes: "The hand-colored drawings in the atlas are from the original copper plates, colored anew by pigments which seem to have been better quality than those used by Wilson." In addition to the coloring, better quality paper was used in this edition, thus avoiding the foxing which almost inevitably mars the first. Thus, this edition is more desirable than the first.