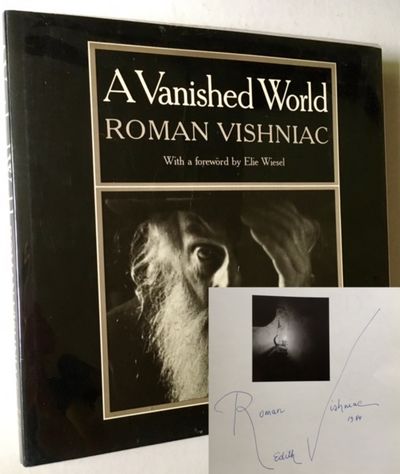 by Roman Vishniac
New York: Farrar , Straus and Giroux, 1983. Boards. Fine/Near Fine. SIGNED BY ROMAN VISHNIAC on the first pictorial endpaper. An unusually clean, impressive copy to boot of the 1983 stated 1st edition. Tight and Fine in a crisp, easily Near Fine to Fine dustjacket. Square quarto, Vishniac's deeply moving, heartfelt portraits of Eastern European Jewry, taken between 1934 and 1939. Foreword by the formidable Elie Wiesel. Truly a collector's copy, the nicest this bookseller has encountered. (Inventory #: 16829)
$200.00 add to cart or Buy Direct from Appledore Books
Share this item
Appledore Books
Offered by