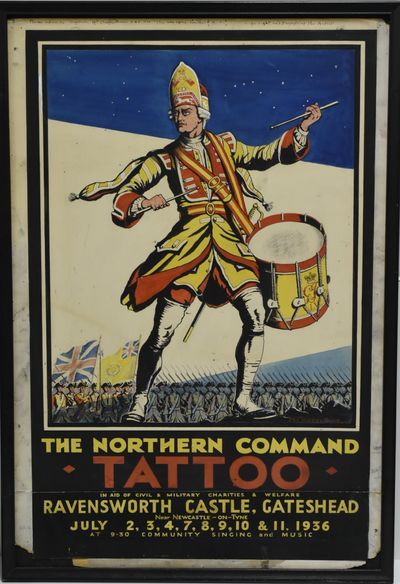 by Captain H. Oakes-Jones
London: The War Office, 1936. Very Good binding. Original graphic art painted by Captain Herbert Oakes-Jones for a poster advertising for the Northern Command Tattoo, at Ravensworth Castle, 1936. The Scots are known for their military tattoos; the Northern Command Tattoo has a distinct comic dimension, involving music, theatrics, and comic reenactments; while in general great fun, it had a more serious purpose as it benefited 'civil and military charities.' A film of the tattoo depicts soldiers dressed in old fashioned uniforms, some costumed as toy soldiers with pantomime cloth horses, others as Saxons and Vikings leaping out of long ships. The artist, Captain Herbert Oakes-Jones worked part time as an artist, and served in the Royal Fusileers in WWI. At the top of the poster is written in ink, "Please return to Captain H. Oakes-Jones M.B.E. F.S.4. The War Office, London: Copyright and Property of the Artist." Signed by the artist at the bottom of the art. Painted on a thin wooden board, with a simple black frame. Minor loss to the corners of the board. Overall in Very Good condition. (https://www.britishpathe.com/video/northern-command-tattoo-2). Very Good binding. (Inventory #: 287080)
$750.00 add to cart or Buy Direct from
Black Swan Books
Share this item

[LAW] {VIRGINIA] THE STATUTES AT LARGE: BEING A COLLECTION OF ALL THE LAWS OF VIRGINIA FROM THE FIRST SESSION OF THE LEGISLATURE IN THE YEAR 1619 (Volumes I-XIII; 13)

Richmond; Philadelphia : Bartow; DeSilver; W. Gray at the Franklin Press; J. & G. Cochran , 1823
(click for more details about [LAW] {VIRGINIA] THE STATUTES AT LARGE: BEING A COLLECTION OF ALL THE LAWS OF VIRGINIA FROM THE FIRST SESSION OF THE LEGISLATURE IN THE YEAR 1619 (Volumes I-XIII; 13))
View all from this seller>