LOG OF THE UNION: John Boit's Remarkable Voyage to the Northwest Coast and Around the World, 1794-1796 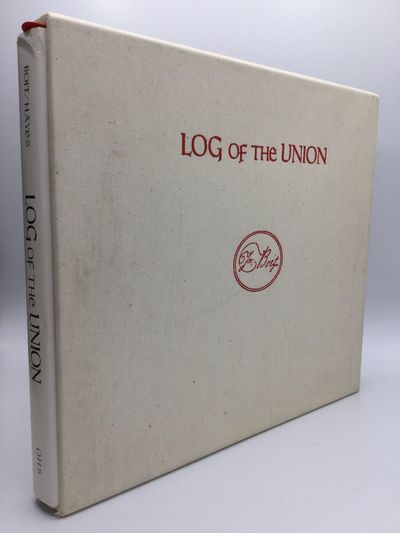 by Boit, John
Portland: Oregon Historical Society, 1981. First Edition. Hardcover. Fine/Near fine. This is No. 46 of 150 copies signed by the editor, Edmund Hayes, and the illustrator, Hewitt R. Jackson, on the half-title. "John Boit first visited the Pacific Northwest as the fifth mate aboard Captain Robert Gray's Columbia Redivida. As the nineteen-year-old captain of the sloop Union, Boit sailed from Newport, Rhode Island, in 1794, bound again for Vancouver Island and on around the world. Tested by foul weather, attacked by Indians, and fired on by the English frigate Reason as they approached Boston, Boit and his twenty-two man crew completed an arduous journey ... [His] straightforward, engaging log of their twenty-two-month journey portrays the Queen Charlotte Islands, Owhyhee (Hawaii), Canton, and the Strait of Sunda in the earliest days of their exposure to outsiders" (Western Historical Quarterly). Oblong quarto. Original cream cloth binding, with red stamping and a ribbon marker. Tiny bit of edgewear to the dust jacket; else a fine copy, housed in the publisher's slipcase. (Inventory #: 69246)
$100.00 add to cart Available from Johnson
Share this item

THE SAGA OF SEVEN SUNS: Hidden Empire, A Forest of Stars, Horizon Storms, Scattered Suns, Of Fire and Night, Metal Swarm, The Ashes of Worlds

New York : Warner Books, Inc. and Orbit , 2002
(click for more details about THE SAGA OF SEVEN SUNS: Hidden Empire, A Forest of Stars, Horizon Storms, Scattered Suns, Of Fire and Night, Metal Swarm, The Ashes of Worlds)
View all from this seller>