CHARLIE CHAN AT THE MOVIES: History, Filmography, and Criticism 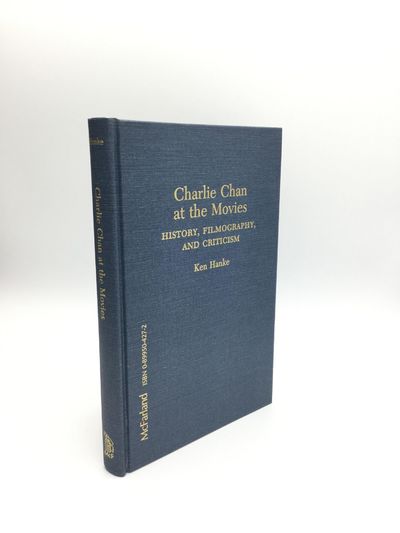 by Hanke, Ken
Jefferson, North Carolina and London: McFarland & Company, Inc, 1989. First Edition. Hardcover. Fine. From the library of Playboy magazine founder Hugh Hefner, accompanied by a letter of provenance from the Hugh M. Hefner Foundation. Definitive history of famous film detective Charlie Chan, from his primitive nonseries beginnings through the well-known Fox series of 44 films (1931-49). The films are presented in chronological order, with full cast and credits, synopses, and evaluations. Biographical details on the three most famous screen Chans (Warner Oland, Sidney Toler, and Roland Winters) and background information on series directors and supporting players, insights into the making of the films, and the full story of the abrupt halt in 1949, as well as an array of the detective's aphorisms (or Chan-o-grams), are included. Numerous textual photographs. Octavo. Original blue cloth binding, with gilt titles. Issued without a dust jacket. A fine copy. (Inventory #: 69254)
$75.00 add to cart Available from Johnson
Share this item

CONFERENCE OF THE BOOKS: The Search for Beauty in Islam

Lanham, Maryland : University Press of America, Inc , 2001
(click for more details about CONFERENCE OF THE BOOKS: The Search for Beauty in Islam)

New York : G.P. Putnam's Sons , 1968
(click for more details about THE VALACHI PAPERS)
View all from this seller>