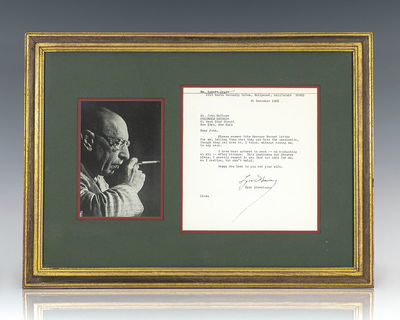 by Stravinsky, Igor
1966. Rare autograph letter signed by Russian-born composer Igor Stravinsky. One page, type-written, dated December 21st, 1966 and addressed to John McClure at Columbia Records, the letter reads, "Dear John, Please answer this Mercury Record letter for me, telling them that they can have the permission, though they can have it, I think, without asking me, in any case. I have been ordered to rest -- no conducting at all -- after Chicago. This postpones our January plans, I greatly regret to say (and not only for me, as I realize, bu can't help). Happy New Year to you and your wife. Igor Stravinsky." The recipient, John McClure was an American recording producer at Columbia Records throughout the 1950s and later operated in a freelance capacity. He worked on over 30 recordings with Stravinsky, 200 with Leonard Bernstein, and oversaw recordings by the Boston Pops Orchestra under John Williams. Double matted and framed with a black and white portrait of Stravinsky. The entire piece measures 19.5 inches by 14.5 inches. In fine condition. Stravinsky found recordings a practical and useful tool in preserving his thoughts on the interpretation of his music. As a conductor of his own music, he recorded primarily for Columbia Records, beginning in 1928 with a performance of the original suite from The Firebird and concluding in 1967 with the 1945 suite from the same ballet. Although most of his recordings were made with studio musicians, he also worked with the Chicago Symphony Orchestra, the Cleveland Orchestra, the CBC Symphony Orchestra, the New York Philharmonic Orchestra, the Royal Philharmonic Orchestra and the Bavarian Broadcasting Symphony Orchestra. (Inventory #: 95109)
$1,500.00 add to cart or Buy Direct from
Raptis Rare Books
Share this item