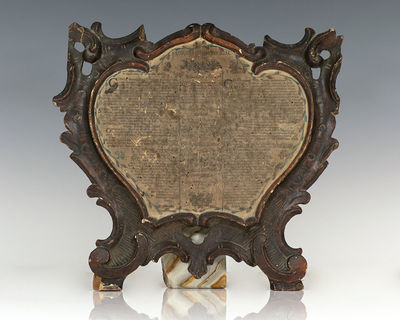 Germany, c. 1780. Rare late 18th century liturgical broadside. Printed broadside mounted on a decorated heart-shaped hardwood frame with a hand-painted botanical border containing Protestant liturgical chants, daily prayers, and hymns. Text in Latin. In very good condition. Scarce and desirable. Christianity in the 18th century was marked by a "great international Protestant upheaval" that created Pietism in Germany and Scandinavia, the Evangelical Revival, Methodism in England, and the First Great Awakening in the American colonies. In Germany, major changes involved a much more personalised religiosity which brought focus to the individual as opposed to the greater body of the church or the ceremony. Liturgical broadsides were placed in the heart of the German home for use in religious contemplation and daily prayer. (Inventory #: 96227)
$1,800.00 add to cart or Buy Direct from
Raptis Rare Books
Share this item