Black Magic: An Account of its Beneficial Use in Italy, of its Perversion in Bavaria, and of Certain Tendencies Which Might Necessitate its Study in America. 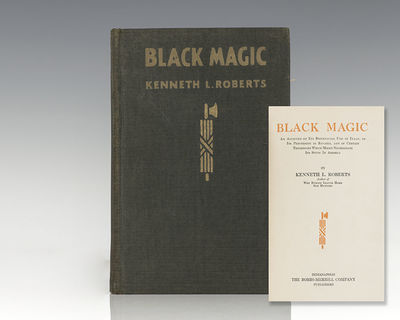 by Roberts, Kenneth J
Indianapolis: The Bobbs-Merrill Company, 1924. Early printing of Roberts' work on fascism in the 1920s. Octavo, original black cloth, gilt titles to the spine and front panel, frontispiece of Mussolini. Presentation copy, inscribed by the author on the front free endpaper, "For S. D. Green with the best wishes of Kenneth J. Roberts Palm Beach January, 1927." In very good condition. A collection of essays that originally appeared in the Saturday Evening Post, Black Magic is essentially a work praising Mussolini and Italian fascism as opposed to the emerging German fascism. Roberts became internationally known for his work with the Saturday Evening Post from 1919 to 1928, and later as a popular writer of historical fiction. (Inventory #: 96104)
$400.00 add to cart or Buy Direct from
Raptis Rare Books
Share this item