General Edward Hand on Framing a New Constitution in Pennsylvania 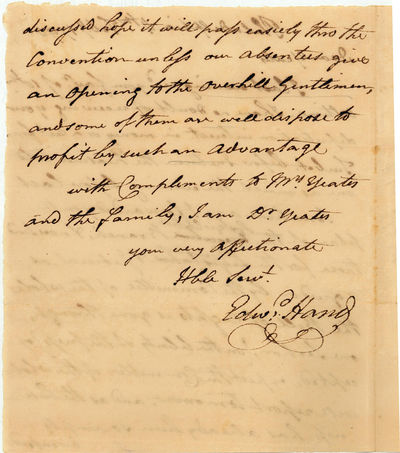 by EDWARD HAND
Edward Hand apprises a Pennsylvania political ally of recent developments at the state convention for framing a new constitution. "Some time ago I forwarded you the plan of the Legislative Branch, & now send those for the Executive & Judicial, as agreed on by the Committee of the whole." EDWARD HAND.
Autograph Letter Signed, to Jasper Yeates, February 4, 1790, Philadelphia, Pa. 2 pp., 6¾ x 8 in.

I last evening recd. your favr. of 10th. Ultimo. I have no doubt of receiving your depretiation interest in money or a rect. from Turbet before I return the treasurer told me as much the evening before last.

Some time ago I forwarded you the plan of the Legislative Branch, & now send those for the Executive & Judicial, as agreed on by the Committee of the whole[.] the Bill of rights is gone through, one Section, (on the liberty of the press) excepted, expect the Committee of the whole will report tomorrow, and as the business has already been so amply discussed [2] hope it will pass easiely thro the Convention unless our absentees give an opening to the Overhill gentlemen, and some of them are well dispose to profit by such an advantage[.]

with Complements to Mrs. Yeates and the family, I am Dr. Yeates

Dr. Edward Hand (1744-1802) commanded troops in the battles of Long Island and Trenton. As Adjutant General of the Continental Army, he assisted George Washington in the siege of Yorktown, and was a member of the board convened by Washington to investigate Benedict Arnold's treason. After the war, Hand resumed the practice of medicine. He served as a member of the Confederation Congress (1784-1785) and the Pennsylvania Assembly (1785-1786), as well as a Delegate to the convention for the 1790 Pennsylvania Constitution.

Jasper Yeates (1745-1817) was a successful Lancaster attorney who was selected as a delegate to the Pennsylvania convention for considering the U.S. Constitution. He was a Federalist, and he supported like-minded Republicans in Pennsylvania politics such as Hand, who sought to reform the state constitution. Yeates was later a justice on the state Supreme Court, and he published the Reports of Cases Adjudged in the Supreme Court of Pennsylvania, 1791-1808. (Inventory #: 20731.99)
$3,000.00 add to cart Available from Seth Kaller
Share this item