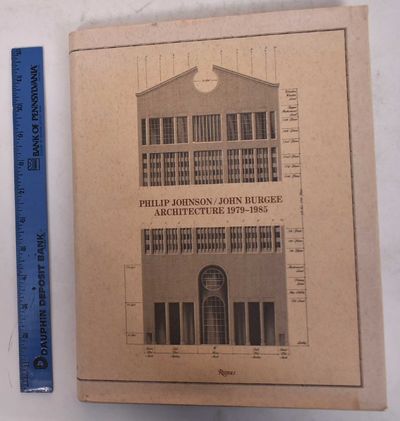 by Knight, Carleton and Ivan Zaknik
New York: Rizzoli, 1985. Hardcover. VG/VG- wear to edges and corners of dust jacket including some small tears.. Illustrated boards with brown lettering, matching dust jacket. 191 pp. Mainly color illustrations. "The past decade has witnessed the realization of Philip Johnson and John Burgee's most innovative buildings in their eighteen-year professional collaboration. No single architectural team has had a stronger impact on the shape of the American skyline. Their impressive output makes an updated volume on their work timely and welcome, both to the architectural community and to the interested public. The twenty-five projects featured in this volume include high-rise office buildings and urban complexes, colleges and cultural centers, commercial and religious monuments. A distinctive and highly varied repertory emerges: the Romanesque ensemble of the New Cleveland PlayHouse; the neoclassical AT&T building in NewYork City; a mansard-roofed skyscraper in San Francisco (adorned with classical statues); the Dutch-gabled Republic Bank Center in Houston; Boston's "village of skyscrapers," International Place at Fort Hill; and that major twentieth century space in Garden Grove, California- the steel and glass Crystal Cathedral. The volume also features buildings currently in production and under construction, such as the triple-tiered, oval-shaped office building on Fifty-third Street and Third Avenue in New York, a very creative manipulation of the New York City zoning laws and the new home of John Burgee Architects with Philip Johnson.The illustrated main text is supplemented by a chronological index providing in capsule form a history of their major built projects." -Jacket. (Inventory #: 170361)
$29.99 add to cart or Buy Direct from Mullen Books
Share this item