Vasemania: Neoclassical Form and Ornament in Europe: Selections From the Metropolitan Museum of Art 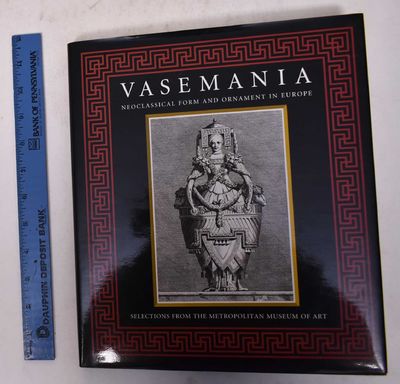 by McCormick, Heather Jane, Hans Ottomeyer, and Stephanie Walker
New Haven: Yale University Press, 2004. Hardcover. New. Black cloth boards with white stamped spine lettering. Glossy black and illustrated dust jacket with white lettering. xi, 194 pp. Mainly color illustrations. Catalogue of an exhibition held at the Bard Graduate Center, New York, July 22-Oct. 17, 2004. Contents as follows: Collecting neoclassical decorative art at The metropolitan museum of art / Heather Jane McCormick -- The metamorphosis of the neoclassical vase / Hans Ottomeyer -- The Hamilton collection and its influence -- The vase as a template for artists and early neoclassicism -- Tradition and innovation at the royal manufactories -- Technical discoveries and the commercial marketing of the vase -- Neoclassicism and the new aesthetic in silver -- The vase as ornament in furniture and furnishings -- The vase as a design element in interiors -- Symbol to satire: the vase as icon. When the ancient sites of Herculaneum and Pompeii were excavated in the eighteenth century, the objects found there renewed artistic interest in classicism. Neoclassical style and imagery permeated paintings, sculpture, furniture, and decorative arts of the period, and a central element of design in all these art forms was the vase." "This book focuses on the vase as an artistic and ornamental form in a variety of media. It presents and discusses almost one hundred hidden treasures from The Metropolitan Museum of Art's collection - not only vases but also wine and water urns, knife boxes, ink wells, perfume burners, fabrics, carved paneling, marquetry furniture, silver, works on paper, and paintings - all using the vase motif. Vase imagery ranged from austere to fantastic to romantic, say the authors of this book, and the vase became a new paradigm of beauty as well as an icon of European neoclassicism."--Jacket. (Inventory #: 170327)
$29.99 add to cart or Buy Direct from Mullen Books
Share this item