Cheaper by the Dozen. 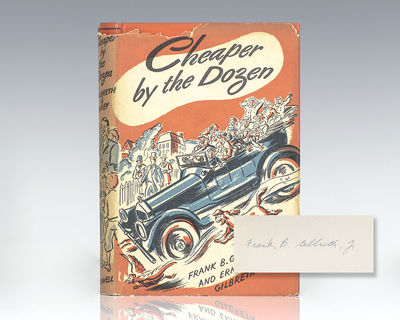 by Gilbreth, Jr., Frank B. and Carey, Ernestine Gilbreth
New York: Thomas Y. Crowell Company, 1948. First edition of this hilarious memoir, the basis for the 1950 and 2003 film adaptation. Octavo, original cloth. Signed by Frank B. Gilbreth, Jr. on the front free endpaper. Illustrated by Donald McKay. Near fine in a very good dust jacket with some wear to front panel. Uncommon signed and in the original jacket. This beloved memoir tells the story of a family of 12 energetic children raised by an efficiency expert father and a psychologist mother. From first dates to tonsil removal to beachside adventures, this book has become a classic of American humor. "Always entertaining, occasionally hilarious, occasionally touching... Sound Americana" (Saturday Review of Literature). This book was the basis for the 1950 film adaptation starring Clifton Webb and Myrna Loy, as well as a 2003 adaptation starring Steve Martin and Bonnie Hunt. (Inventory #: 97548)
$2,800.00 add to cart or Buy Direct from
Raptis Rare Books
Share this item